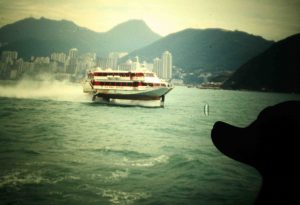 It was here, where an epic journey started 1991.

1993 to 1994 Luck Duck Sheila joined me on a trip round the world. I had to save some money and could not spent to much on taking analog pictures of Sheila, but Sheila was at every place shown. Sheila was treated nice and had a lot of trills: She enjoyed cristmas on Fidschi Island, breathed the air through the open airplane door on Hawai, had a New Years Eve party in Los Angelas and could experience a small eathquake there; luckily before the Northridge quake Jan 1994 and see the results after the quake as we had to go back through LA, visited good friends in Missouri, was taken on a ballon ride at Alice Springs, was able to walk up on Ayers Rock in the
evening of one of the few days when they had rain there (notice the paddles on Eyers Rock),  picked up an Aborigini HitchHicker in original costume, experienced some great thunderstorms in Darwin, saw a crocodile in Kakadu national park, saw Kangaroos Close to Sydney, enjoyed the beach at Cairns but did not go into the water because of the box yelly fish,  Sheila helped me learn diving on the Flying Dutchman at the Whitsunday Islands at the Great Barrier Reaf (Airlie Beach), joined me on a jungle night walk at Cairns, helped me in one of the Australian beer drinking contests after the scuba diving boat trip, rode on a Greyhound Bus from Cairns to Brisbande, stayed in the YHA Jockey Club Mount Davis with one of the greatest views on Hong Kong, landed on the old Kai Tak Airport in Hong Kong and enjoyed the Kai Tak Heart Attack,had some strange things to eat in Hong Kong Victoria Harbour (the chinese menu was hard to understand), saw sharks and sea snakes on Fiji islands (Fidschi), learned that if Tribal Chiefs die, they might turn into sharks and that this can cause restrictions for scuba diving, had a drink in Tijuana Mexico; Sheila was amazed of all the construction activities in China, spent a handful of Hong Kong-Dollars gambling in Macao, took the hydrofoil…..
We came through the following countries:
Taiwan (only an hour but outside the Transfer area, Hong Kong, China, Macao, Australia, New Zealand (only for half a day), Fidschi, USA, Mexico (plus the Airports of Amsterdam and the old Bangkok Airport).
The biggest part of the trip was spent in Australia. 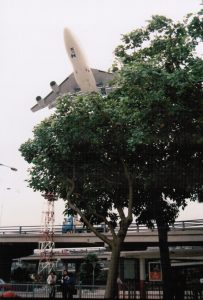 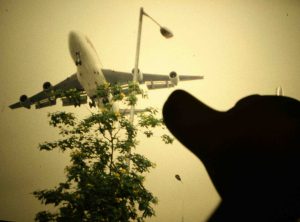 1993 Sheila landed on the old famous and notorious Airport Kai Tak . It was one of the most difficult Airports to land on (6th) and one of the busiest. The landing was also known as the Kai Tak Heart Attack. We were flying with Air China and short before another plane of the same company slipped into the bay at the end of the Kai Tak runway as it could not break in time. But we had a good landing and enjoyed to look into the peoples appartements in the near by highrise buildings. With the delay I was scared though I would not get my checked in backpack. The flight itselve was a torture. I had to go through Amsterdam which made the distance to Asia even longer. The plane started late in Amsterdam, the connection at the old Bangkok Airport too and I by that missed my connection in Taiwan. The next plane which I had to use from Thaipei after that did not start at the same terminal which I did not realize. As time was running out, I adressed the counter and then somebody took me in a rush and brought me to the other gate. In the event I did leave the transfer area in Taiwan which means I for short entered and exited Taiwan. My arrival in Hongkong due to all that was about 6 hours later than planed and I could not go to the YHA as planed as they closed at 10 in the evening at that time. With not much Information, money and poor experience I decided to not book an expensive hotel in Hongkong but to rather spent the night in Kai Tak Airport. I could sleep a little there in the emptying waiting hall and Sheila could watch the cleaning crew doing it’s work early in the morning. And I did get my backpack too, all in all a great experience.
What a start for my round the world trip. 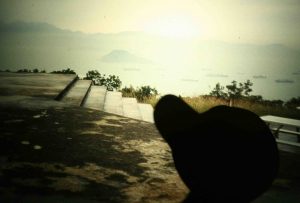 At the next day I then made it to the YHA hostel on Mount Davis. I took the subway and bus to get as close as possible. The hostel did not have a shuttle bus at that time so I walked up on the hill which was quite exhausting with my heavy backpack. But we made it and later enjoyed the splendid view on Hongkong from Mount Davis. 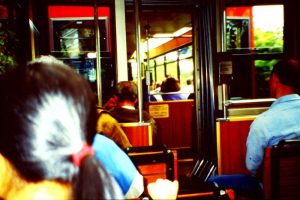 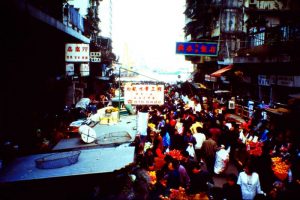 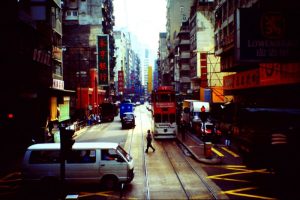 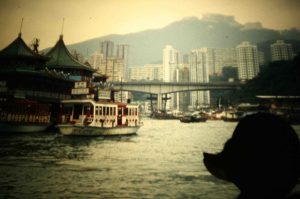 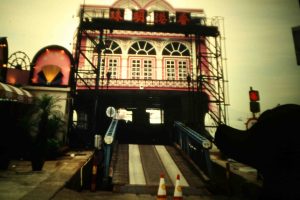 The Harbour was visited 2013 by a Giant Rubber Duck., an event which also inspired this lovely song.

As we returned early from Macao (Macau) the youth hostel was not open for check in so I we went for an early lunch in the Harbour Restaurant and as we could not read the menu I ordered something at a medium price. I still don’t know what it was, I though think that it was basically vegetarian food. The waitor however looked surprised. 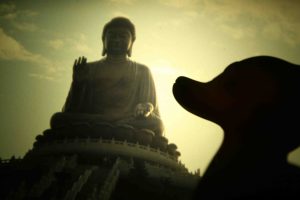 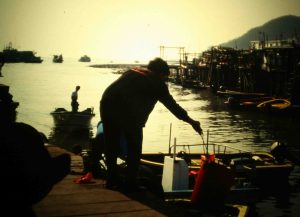 Sheila was impressed by the biggest sitting unattached Buddha statue, the „Tian Tan Buddha“ at that time (now Taiwan has a newer bigger one in Kaohsiung) and used the old hand drawn ferry on Lantau Island. She felt sorry for the poor cat who was leashed in the bird store but I am sure the birds were glad. 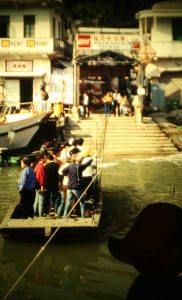 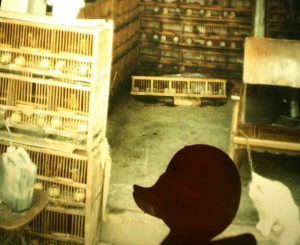 One of Sheilas Souvenirs: 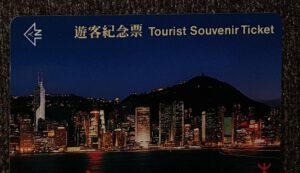