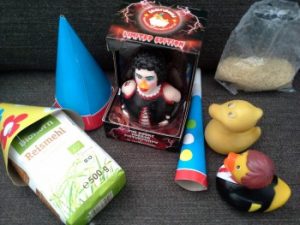 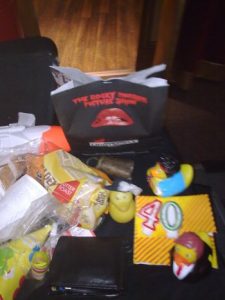 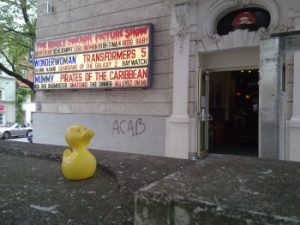 Early this morning (25.06.2017) Luck Duck Sheila and some friends attended the 40’th anniversery of the first night opening of classical movie  “THE ROCKY HORROR PICTURE SHOW” in the “Museum-Lichtspiele München” which lasts 40 hours with ongoing repeating performances for 40 hours. You can still join (until 25.06.2017 evening). It is just over the river from the “Deutsches Museum“.

Frank, Sheila and Johann disappeared during the show for a while and returned exhausted, I don’t know what happend. 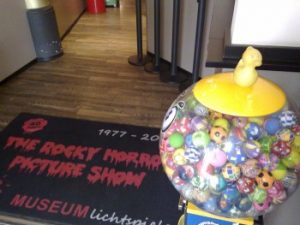 There is a  special movie hall in this theatre just for this film for many years and it has many frequent customers coming together every weekend and having a party and meatloaf for dinner. Dancing, singing and joining the show is very wellcome and supported by the operater by “Join the Show” packets for 2 Eur.  You can bring you own equipment too, here are some of the basics:

Though Sheila insisted to bring and use her own stuff I baught the packet as a Souvenir.

Sheila braught some friends too. The film and theater is mentioned in many travellers guides about Munich. 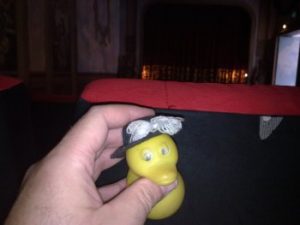 The film Features Meat Loaf (role of “Eddi”) who is a well know collector of Rubber Ducks, playing the Saxophone in his short life appearance.  He also owns a celebrity Duck “Frankenfurter” (proudly Designed and Sculpted in the USA, Made in China).

Wikipedia says, that Meat Loaf’s music with his epic, long rock ballades refers to the music of German iconic composer Richard Wagner, a good friend of Wittelsbacher King Ludwig II. So to get some new wild Duck Links Sheila insisted to attend a opera performance of “Der Fliegende Holländer” (The Flying Dutchman)  created by Richard Wagner immediatly in the “Passionsspieltheater Oberammergau“.

And let me give you that advice: if you want to play the saxophone you have to put down the duckie. And since we of all the things are also enjoying Danny De Vito Dancing to this song, let me add this link to this masterpiece of technical engineering and movie highlight.

Yesterday  I also found this new Duck which is making bathtime a great time again and this original suitable song.