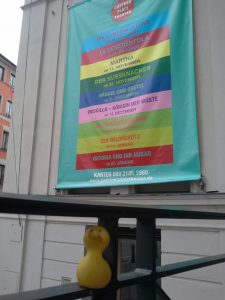 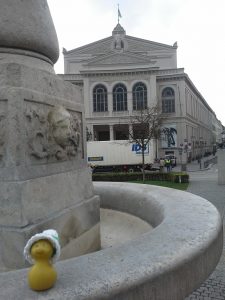 Sheilas got information that at the Gärtnerplatztheater, Munich, Duck Anna J. Enterbko (this link is strange, it is not my picture and I do not have it on my server, the original picture from the Gärtnerplatztheater was on the web for a short time and I only linked to it; then it disappeared; now ist back to our delight. duck-links.com has nothing to do with the creation of this piece of art; i’d love to publish it, but it is not mine; interesting, seems like all your searches and resulting pictures are obviously again recorded and linked in the search engine servers, even if the original is gone) is singing a duet with  Levente Páll (Don Magnifico) in the opera buffa La Cenerentola or »La bontà in trionfo«,(Cinderella Story) with the famous challenging ending operatic aria (here another performance as example) „nacqui all’affanno“ … „non piu mesta„.

So I had to get us a ticket.

Libretto by Jacopo Ferretti based on Francesco Fiorini

As Sheila is a fan of the Wittelsbacher, Sheila loved Castle  Neuschwanstein in the scenery (the model for Disney’s Cinderella Castle) as fairytale palace, Prince (Arthur Espiritu) who appeared in Wittelsbacher blue, the servant (Matija Meić) in King Ludwig II. costume and Angelina („Cenerentola“, brilliant Diana Halla) in a „Sisi“ costume at the end.

Also at the end the prince appeared with a crown (like the one on Ludwig I. Monument at the Odeonsplatz) but as the attentive reader here should know, the Wittelsbacher didn’t wear the crown.

Sheila though did not like the Mercedes sports car (though a great car) instead of a carriage in the background in red colour, on a stage in the headquarter town of BMW.

Highlight of course was the Duck Anna J. Enterbko singing a duet with Don Magnifico (brutal and corrupt stepfather, Levente Páll; who likes his Rubber Duck more than his stepdaughter) in act 1. The striking original picture (n o t   mine) which was on the web for a while disappeared but the duck is still present in the search engine and mentioned in the critics.

The Ducks have also made it on the stage of the most renowned theaters. 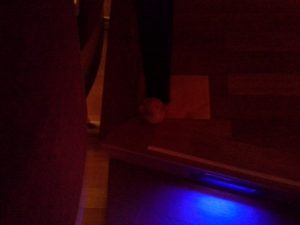 Here is another interesting opera, “The Homosexual Necrophiliac Duck Opera” which proves the impact the Ducks made in the world of art. scarily enough based on a true story.