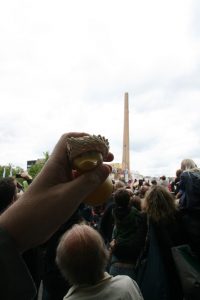 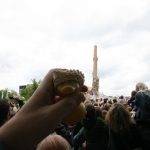 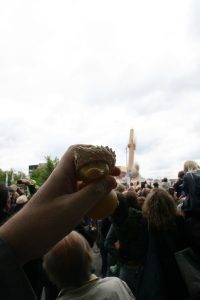 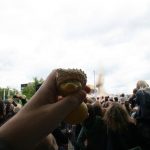 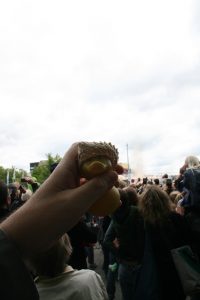 Hundreds of curious onlookers watched the blowing up of the Paulaner Beer Brewer Chimney at the Münchner Nockherberg.  (known from the “Derblecken” (roast). Paulaner beer is sold in three of the big beer tents on the “Wiesn” (Oktoberfest; Paulaner Festhalle Winzerer Fähndl with the striking yellow tower with the giant Maß, “Armbrustschützen-Festhalle” and “Käfer Wiesn-Schänke”. A event Sheila could not miss out on as no other duck here has documented the blowing up of buildings. I didn’t see any other ducks round. The event took place at 10:56 at July, 15’th, 2017.

As far as Sheila can tell everything went fine, nobody was hurt. The explosion sounded loud and deep after a warning signal. And it took the chimney some moments to  start breaking down.  Maybe thanks to the blessing of the Monk Franz of Paola (1416-1507) of the Paulaner monastic order. Paulaner is sponsor of the FC Bayern München and the beer is used for the “Weißbierdusche” (here another one) and played a role in the “Weißbierlüge” scandal.

Funny Thing was while driving home 10 minutes after the event the radio station BR Bayerischer Rundfunk ( one of the public stations Germans are forced to pay fees for) still said that the event would soon take place. And it was not the Paulaner Tower which was blown up as stated in the news. It was the Paulaner Chimney. The other Paulander Tower at the Nockherberg, part of the production plant was already braught down.  Donald Trump probably is right, it’s all fake media out there with the public sponsored/taxed radio in charge.

The chimney looking a little bit like a tower was built with brick Stones (here is a record high brick tower) and only view explosives were needed to topple it. (November 2017: the Google Satelite Picture still Shows the chimney Standing)