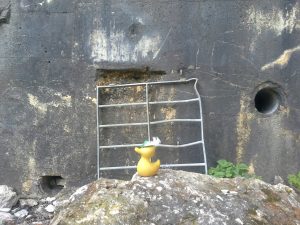 Cerusit (Bergkristal) in Oberammergau (Cerusit is a crystal) was also a project of the U-Verlagerung (like Project Duck on the other side of the mountain) of Hitler. Messerschmitt planes were also produced here. It appears in this TV documentation „Das unterirdische Reich“ (The Underground Empire) Watch this brave Duck who gets in a big mass fighting the NAZIS.

Sheila decided to look for the hidden place which is situated next to the Hötzendorf – Kaserne (barracks). It was blown up after WWII after the secret stuff was moved out by the Americans and used for American air and space programs. The tunnels are secretly opened once in a while for safety inspections but it seems as if they try to keep the places as confidential as possible. We walked over slippery old stones and finally found an old car hood which seems to mark the former entrance of the train track from the barracks into the tunnels. We also found an entrance which was blocked by a wire fence but there was a hole in it, so Sheila could sneak through it. An old bridge, probably for the train from the barracks to the tunnels. Responsible for the construction was SS celebrity Hans Kammler.

He was in the area short before the end of the war in spring 1945. Bills from the even smaller Linderhof prove that. He mysteriously disappeared after the war and some historians say he committed suicide, others say he went to the United States and worked for US secret agencies. Some rumors have it that he was also involved in the NAZI nuclear programs. Seing a documentation about Hans I came up with the idea that Hans disappeard someplace in between Oberammergau and Unterammergau. Just like JFK on his trip. An Amercan investigator came up with one document after WWII, where it is said, that Kammler was arrested in Oberammergau in May 1945. (like Wernherr von Braun) But maybe fled and went to Austria. But in the following underwent an identity change here at Gmunden before being braught to the US with important technical information.

2015 a B-movie was released, “Bunker of the Dead” whose story plays in that bunker system. It is a 3D movie from an ego shooter perspective.

It has got it all: NAZIS, aliens, bombs, hootings, explosions. No great art but lots of trashy fun. The two friends Markus and Thomas learn, that there is something evil in the tunnel left: evil and hungry.

If you are coming from the area, it for you is a nice „Heimatfilm“ (sentimental film in idealized regional setting).

The real Conrad-von-Hötzendorf barracks appear in one of the opening scenes of the movie.

It is now used as a NATO school. 1984 the terrorists of the RAF (Rote Armee Fraktion) tried to commit a bomb attack here. But, the bomb did not work (or was discovered too soon, security an RAF tell a different story), so fortunately the attack failed.

I remember, that I for the first time in my live got into a police control. I was driven home from a sports class that evening by car by other comrades parents.