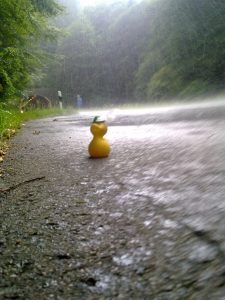 Secret project Duck was started by Adolf Hitler 1944 after the Allied forces gained superiority over German airspace. It was part of the campaign U-Verlagerung (move plants underground) So many military production plants had to be moved to bomb proved underground tunnels. Those projects often carried the names of animals. Like Pigeon or Duck.

The plant in Eschenlohe received the name “Ente” (Duck). Production was moved from the Messerschmitt plants in Augsburg to this tunnel. Fight jets like like the Me262 were produced here. The necessary energy came from the nearby hydroelectric plant “Walchenseekraftwerk”. Another secret tunnel project “Cerusit” is just on the other side of the mountain range (Laber) next to the Hötzendorf barracks at Oberammergau and rumors have it, that the two systems are connected by another escape tunnel. But it was never found, even after the direct line was cut by the freeway A95 from Munich to Garmisch – Partenkirchen for the Olympic Games 1972.