Sheila and I went to Canada 1989 (?) before continuing to the USA. We visited friends in Missisauga close to Toronto and than continued with the train through eastern Canada along the St. Lawrence River and than on to Halifax.

Sheila and I of course had to go up on CN Tower in Toronto, the highest building and Tower at that time. 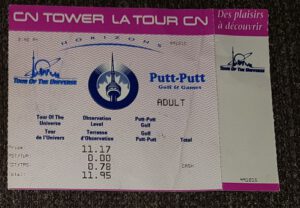 we also went to the Niagara Falls, went with the famous Lady Of The Mist boat (we had to wear a rain suit) and visited the famous tunnel behind the falls which appeared in several movies like Niagara 1953 with Marilyn Monroe or „Last embrace“ 1979 with Roy Schneider. We also walk across the Rainbow Bridge and even came into the USA territory but stayed before the border control so we did not have to show a passport. No walls at the border on the middle of the Bridge existed at that time.

The Cathedral „Notre Dame“ in Ottawa is a Basilica Minor.

Notre Dame is a popular name for important churches like in Paris or in Saigon Vietnam. It started with a small wooden church 1832.

We saw some interesting pieces in the National Gallery of Canada Ottawa in the section for modern art like this Urinal. We tried to figure out the meaning of this piece. We thought it may be a very useful, even pretty piece at the right place, even with a nice view, but we could not figure out how to use it although we tried hard.

We also visited the parliament in Ottawa. Sheila and I did time in Ottawa prison, the place where the last capital sentence was executed in Canada. The gallow is still visible. It’s said that the last one executed was maybe innocent and that he is still in the building as a ghost. If you are lucky you may even stay in the death chamber and Report your ghost experiences in a guest book. The gallows and cells are still functional though they now serve as youth hostel and Tourist attraction. The Big Owe Olympic Stadium Montreal was a very expensive project and still causes a lot of investments in its maintenance and safety. We went up on the tower. Especially the roof in the harsh Canadian climate still causes permanent concerns considering the safety, the parking house had problems too with falling concrete. Several people were hurt. Then we were there in the late 1980’ties the roof was still foldable, it isn’t any more. Sheila and I even went fishing at Halifax and Sheila was quite proud about our big catch. 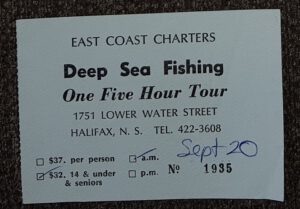 Halifax is know for the Halifax Explosion 1917 and is also linked with the Titanic wreck, respectively the rescue and recovery operations round the Titanic incident.