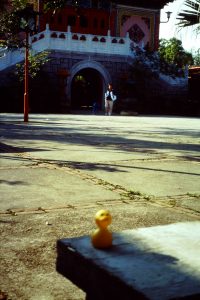 1993 to 1994 Luck Duck Sheila joined me on a trip round the world. I had to save some money and could not spent to much on taking analog pictures of Sheila, but Sheila was at every place shown. Sheila was treated nice and had a lot of trills: She enjoyed cristmas on Fidschi Island, breathed the air through the open airplane door on Hawai, had a New Years Eve party in Los Angelas and could experience a small eathquake there; luckily before the Northridge quake Jan 1994 and see the results after the quake as we had to go back through LA, visited good friends in Missouri, was taken on a ballon ride at Alice Springs, was able to walk up on Ayers Rock in the
evening of one of the few days when they had rain there (notice the paddles on Eyers Rock), picked up a Aborigini ), picked up a Aborigini HitchHicker in original costume, experienced some great thunderstorms in Darwin, saw a crocodile in Kakadu national park, saw Kangaroos Close to Sydney, enjoyed the beach at Cairns but did not go into the water because of the box yelly fish, Sheila helped me learn diving on the Flying Dutchman at the Whitsunday Islands at the Great Barrier Reaf (Airlie Beach), joined me on a jungle night walk at Cairns, helped me in one of the Australian beer drinking contests after the scuba diving boat trip, rode on a Greyhound Bus from Cairns to Brisbande, stayed in the YHA Jockey Club Mount Davis with one of the greatest views on Hong Kong, landed on the old Kai Tak Airport in Hong Kong,had some strange things to eat in Hong Kong Harbour (the chinese menu was hard to understand), saw sharks and sea snakes on Fiji islands (Fidschi), learned that if Tribal Chiefs die, they might turn into sharks and that this can cause restrictions for scuba diving, had a drink in Tijuana Mexico; Sheila was amazed of all the construction activities in China, spent a handull of Hong Kong-Dollar gambling in Macao, took the hydrofoil…..
We came through the following countries:
Taiwan (only an hour but outside the Transfer area, Hong Kong, China, Macao, Australia, New Zealand (only for half a day), Fidschi, USA, Mexico (plus the Airports of Amsterdam and the old Bankkok Airport).
The biggest part of the trip was spent in Australia.

We visited the home of the founder of the Modern China, honorable Dr. Sun Yat Sen Zhongshan in the province of Guangdong. 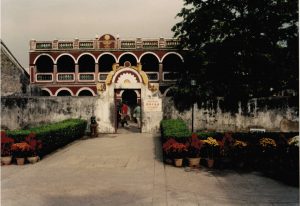 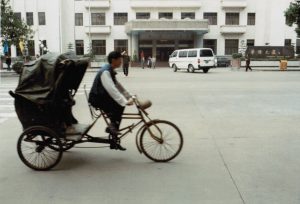 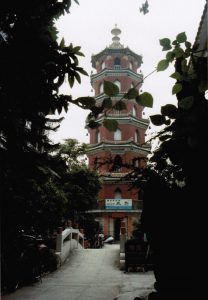 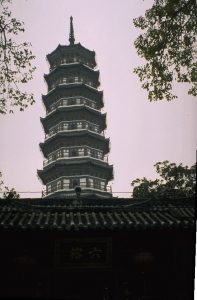 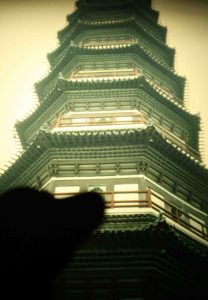 Sheila learned, that „Big Yellow Duck“ in 2009 was cencored by the „Great Firewall„, of course great nations have to be protected from yellow ducks.

We also visited as Silk factory and Sheila insisted that I should buy myselve a decent new Silk tie. I got a nice good Quality one, handmade 100 % Silk for 150 Yuan, about 20 EUR today which I cherish a lot. 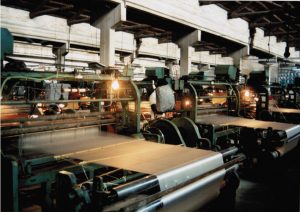 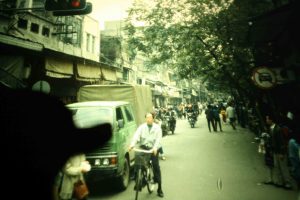 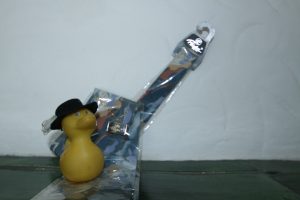 Germany had a small colony in China (another example is Namibia) and participated in the counterinsurgency of the “Boxer Rebellion”, like some other colonial powers.

Emperor Willhelm II. held a famous speech „Hunnenrede“ during the farewell of parts of the German Navy , being sent to China, which later brought the Germans the nickname “Huns”. Which was used a lot in England, also by „Queen Mum„. The speech contained the order to commit war crimes. Germany, England, USA and Russia all worked together to pursue economic interests in China at that time.

In memoriam of Andrik who fell from the Chinese Wall. (not our picture; copyright: Erik from Norway) 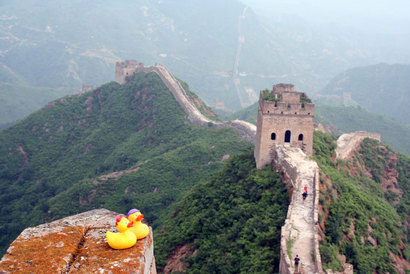