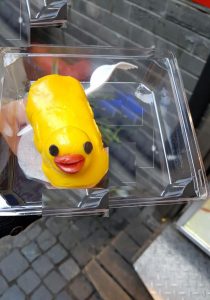 Friends braught home this Picture from Shanghai of this tasty Yeast Duck Dumpling. There are numerous Blogs on the web on how to form and bake Yeast Dumplings.
The friends also told me, that they did see a giant rubber duck in a lake, mayby it was this one.

In the 1930 Shanghai was called the Paris of the East and the New York of the West.

1946-1947 21 Germans were convicted in the Shanghaier War Crime Proceedings and later braught to the prison Landberg in Germany. (US War Criminal Prison Nr. 1 at that time)

In the late 18’hundreds the German Empire, jealous of their British cousins claimed “einen Platz an der Sonne” (a place in the sun) and prominent persons like sociologist Max Weber also demanded for a more active role of the German empire as a colonial power. China was considered to be a big potential market. And the German fleet needed a base in Asia too. 1898 the German empire after reinforcing its military presence after the murder of two German Roman Catholic priest in the area was able to obtain a 99 year leasehold of a piece of land between Shanghai and Beijing at the coast at the Kiautschou Bay.

On the occasion of the Boxer Rebellion 1900 Germany together with 8 other nations (America, Austria, Britain, France, Germany, Italy, Japan, Russia) invaded China and stopped the Rebellion. German emperor Wilhelm (II) held his famous „Hunnenrede“ before sending his troops to China ordering his troops to commit war crimes.

Should you encounter the enemy, he will be defeated! No quarter will be given! Prisoners will not be taken! Whoever falls into your hands is forfeited. Just as a thousand years ago the Huns under their King Attila made a name for themselves, one that even today makes them seem mighty in history and legend, may the name German be affirmed by you in such a way in China that no Chinese will ever again dare to look cross-eyed at a German. (source: wikipedia)