This morning (03.05.2020) I took Nibbles to the lake on our regular course round the lake and hills in the Ostpark (park) in Munich. And after a while we to our delight discovered that Daddy Swan was guiding two fresh slipped Swan Chicks over the lake. Their big legs look great.

On our tour we first saw two other families of ducks of which the number of chicks has decreased the past days.

But there is still a significant number of chicks so the Mother Ducks did a good job.

As this spring was extremely sunny but much too cold with nights with freezing temperatures and dry with only few grass growing we were afraid the Swans would not be successful with the breeding efforts. Also because due to Corona fewer people are in the park and the restaurants are close. But when we came round the corner were Mother Swan is still nesting we saw Daddy guiding two Swan Chicks across the lake and at the shore.

I did not want the Swans to get scared of Nibbles so I took him out of the pocket first when the Swans were far away.

But I think that I got the first picture of our little Swans with a Rubber Duck this year.

Wittelsbacher King Ludwig II. also was a fan of Swans and had a Swan Boat in the “Venusgrotte” (artificial, electrically lighted cave) in Castle Linderhof. And the name of his castle “Neuschwanstein” speaks for itself.

Saturday last weekend 25.04.2020 some members of the Swarm joined me on a bicycle trip to the little but wealthy town Berg at the “Starnberger See” lake.

We again visited the Memorial which was set up to commemorate Wittelsbacher King Ludwig II. place of death.

King Ludwig was found in shallow water close from the bank of the lake 1886. Officially they said, that King Ludwig committed suicide here. After he was toppled and put under tutelage by his uncle. He privately had piled up a lot of debts building his Fairytale Castles, maybe risking the Wittelsbacher family heritage.

But rumors have it, that his blood was not the one of a Wittelsbacher and that he was killed by his family. Maybe also, to save the bloodline.

It was stated, that official father Maximilian II. was not able to have children because of a bad disease he had picked up in his younger days on a Grand Tour in Budapest. Hungarian newspapers wrote about it at that time. King Ludwig II., like his cousin Empress Sissy was a good swimmer. The “Haus der Bayerischen Geschichte” (museum in Regensburg; Ratisbon) displays the non Smoking Gun, a „Windbüchse“ with which (other rumors say) Ludwig II. was shot. It operates with compressed air and is more silent.

His doctor Gudden died too in the event, maybe killed while trying to prevent the suicide (he was much smaller and lighter than King Ludwig at that time). Or maybe because Gudden was an eye witness.

The Doctor is burried in Munichs’s Ostfriedhof.
Both had watches and the one of Gudden stopped later than the one of Ludwig due to the water they fell into. Some sources say, that a lot of money was found in Guddens pockets.

I should mention, that uncle Prinzregent Luitpold built the Votivkapelle not sooner than 10 years after the event

under the presure of the Bavarian population. Luitpold took over the rule after King Ludwigs death, representing the good old times. Ludwig II.’s brother King Otto was mentally sick. Luitpold was a passionate hunter who also hunted Ducks in the “Englischer Garten” in Munich. But he loved to feed Swans in the park. 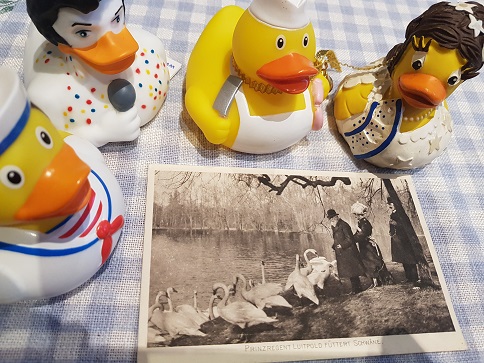 Before the event King Ludwig II. was arrested in Castle “Neuschwanstein” and brought to Castle Berg were King Ludwig had stayed and ruled most time during his rule. His new built Castles were not all completed at that time.

Ludwig put up Tsarina Alexandrowna here in Berg 1868 which he redecorated for her. (maybe she also came to visit 1867) She too was a very remote relative but also a friend of King Ludwig and they wrote to each other often.

King Ludwig II. staged a big event for her 1868 with firework and water fountains.

Ludwig first met her in Bad Kissingen 1864 and later in the popular Spa Town.

People started to talk about the relation so it had to end.

Head of the Wittelsbacher Family Franz Von Bayern lives here in Berg now in summer. But also has an apartement in Castle Nymphenburg in Munich.