The first bigger town in Mali we came too after leaving Burkina Faso was Mopti at the Niger River. The Niger River has a very unusual turn and fooled many people and nations. Some thought it was part of the Nile, others that it would run westward

When we came to Djenné 1989 it was still possible to visit the beautiful, old historically very Important Big Mosque of Djenné the pinnacle of Sudano-Sahelian architecture. It is a world cultural heritage. One of the most important islamic learning centers was here during the middle ages.

The buildings in town showed many nice details 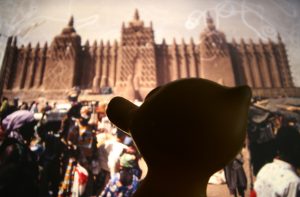 We managed to get there at the market day when lot’s of people from the area were streaming into the town to the market place. After we crossed the Bani river with a pirogue we, like many people walked for the last km into the town which slowly and magestically appeared in the dust. 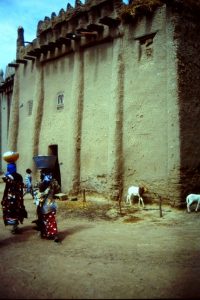 Famous Abū ʿAbdallāh Muhammad Ibn Battūta, muslim traveller (maybe the biggest traveller of all the times), born 1304  in Tangar Marocco, scientist and writer past this area a bit further north through Timbuktu/ Mali and Mauritania and Ibn Battuta who is commemorated in many countries for the first time wrote in his „Rhila“ that the Niger was running eastward, know how unknown in Europe till the 19’th century.

1989 there were conflicts with Mauritania in the North and we were adviced not to drive to close to the mauritanian border so we did not drive to Timbuktu. King Mansa Musa I. ruled Mali in the 14’th centrury and exploited the legendary rich gold occurence  in the Country. And he spent a lot of the gold too, also in Egypt where he even caused a crash of the Gold price at that time. Mali possesses other Mineral resources too such as Uranium.

Of course Sheila had to get another souvenir in Djenné, I found her this nice duck in brass, which looks a Little bit like gold. 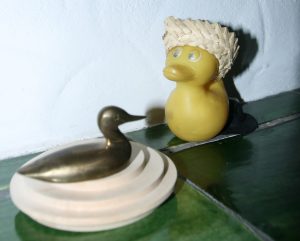 On the way to the capital of Mali, Bamako I shot this artistic photo and I gave this piece the title „Petas Nightmare“.

Because I was talked into buying too much souvenirs I was running out of cash and banks on the way were rare. Therefore I did not join the extra trip to visit the Dogon people in the Bamako area. But we stayed at a youth hostel and could use the facilities and I could wash some of my clothes. Later I to my relief found a bank where i could get money with my credit card. And I could buy more rolls of film.

After Bamako on the way to Senegal the most challanging part of the tour started. I never felt as far away from home than here. At first we tried to drive on a more southern path but changed our mind at this bridge.

We camped out in the wild and had to set up the tents every evening. 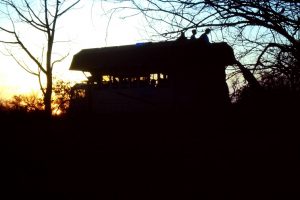 We travelled over gravel roads and lived on the sterilized water we had in a tank in the truck and sometimes baught some food on local markets. I remember once we baught fresh peppermint leaves and made tee, and boy was it good. One time we came past a well with a pump which had been drilled by a international Organisation but the pump was no longer working properly and did only work with extreme strain and the help of the locals. 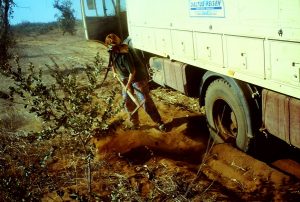 Sometimes we got stuck in the sand and had to shovel us out and use sand metal panels. One time we also came by a fast moving wild fire, several times we saw burned areas on the way.

We had two flat tires, fortunately only two as we only had two spare tires. We were the big attraction as we changed the second tire in the dusty Sahel Zone. The tire had been pierced by a giant thorn from one of the bushes along the path.

We also saw many traditional brick productions along the way. 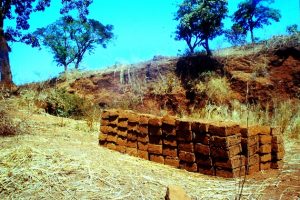 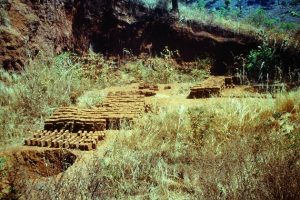 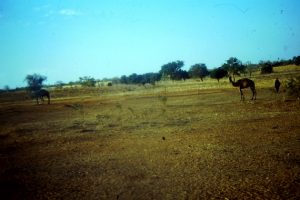 We also came across some local people who were digging for fish in the dried out mud of the river. Some fish by ducking in the mud can overcome the draughts and we past many small local villages.

Finally we made it to Kayes in the north-west of Mali along the Sénégal river, nicknamed „Pressure Cooker of Africa“ for it’s extremly hot temperatures and humidity, one of the hottest places to live in Africa. 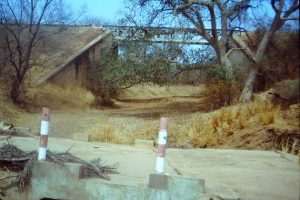 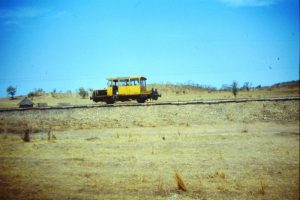 Kayes is an important trading point only 70 km away from the senegalese border, has an international airport and lies at one of the view railroads in the region,  the Dakar-Niger Railway. It used to be the most important railway here.

Because of some accidents passanger service was posponed. I read that China now plans to rebuilt it. 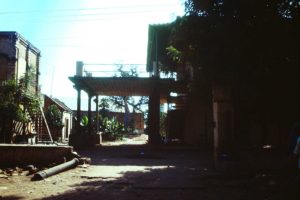 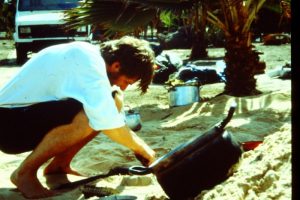 Instead of using water to clean our cooking pots we sometimes used sand.