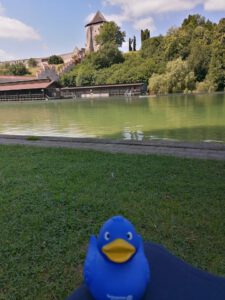 No duckomentation about the Wittelsbacher Dynasty would be complete without mentioning the longest castle in Europe (?? the world ??),  “Castle Burghausen” (1051 m). It is situated at the river Salzach (close to the German/Austrian border) which was important for Salt Trade and a good source of income for the Wittelsbacher family.

Due to the big spending of Hedwig Jagiellonica (1457-1502), wife of Wittelsbacher Duke George the Rich, George was not as rich in the end as before.  The wedding in Landshut also costed a lot, a todays worth of 22 million Euros 1475. Emperor Frederic III., one of 9000 guests, led the bride to the altar. 323 oxen were grilled, much more than in the Ochsenbraterei at the Oktoberfest in a normal year. The dowry of the Polish bride was also not paid as agreed on.

Living in Burghausen and as ebay had no trusted shop in the area and amazon did not deliver as well, a lot ot the goods had to be brought in complicately from Landshut (horses, fruit, wine, a monkey kept as a pet).