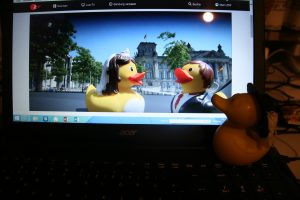 While watching the “heute-journal” 19.07.2017 (important part starts at 10 min, 30 seconds)Luck Duck Sheila came across this report in the ZDF (second german TV station, one of those stations Germans are forced to pay fees for) where the ZDF unveiled the new relation between Johann and a new chick and another less important story about the Große Koalition (alliance between the normaly hostile SPD socialists and the CDU/CSU christian conservatives). It showed Johann, on which Sheila just recently casted an eye on after Andrik was lost in China,  with a new girl. The innocent looking Johann (rumors have it he also has a peculiar relation with Frank), seems to have found somebody new in Berlin and was caught on camera in one of the investigative reports of the heute-journal. So the ducks have finally made it into the most serious news programs. 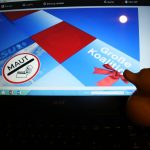 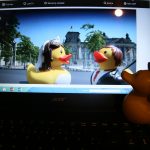 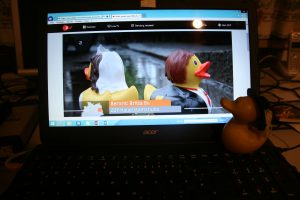