Ship in the City 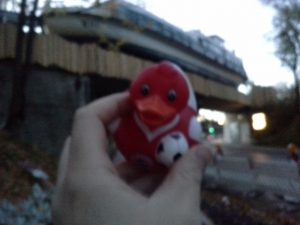 As Munich, Germany possesses many navigable waters (0, zero m) and Bavaria is known for it’s splendid Navy  (at least they provided for the name of a class of ships built and controlled by Hohenzoller emperor, the Wittelsbach-Class ) some genious had the brilliant  idea that a party ship or ship which could be used as special event area should be placed in downtown Munich. Munich is known for not having enough event areas. So the MS Utting, before used on the „Ammersee“ was transported and with enormous efforts placed on a bridge in Munich, Sendling. The City of Munich supported the idea. It arrived at the 22’nd of February 2017 after a logistical masterpiece.

However it’s use is completely open so far as all necessary public approval’s are still missing and the safety of the installation has not yet been granted. Too much potential noise is an issue too, all things which came as a total surprise to the initiators. Sounds like a lot more taxpayer money has to be spent on the project. Sheila uses to say: Suckers are born every minute, you just got to find them.

Sheila suggests, that on both sides of the road walls across the street shall be built, to prevent

-or extatic art and theater lovers

from falling down on the street from the bridge. Which of course means that the traffic on the road below would have to be shut down and redirected to different roads. Or maybe to a new tunnel.

Though not being on navigable waters the ship now is in stormy waters and public critics.

The Wittelsbacher also have the theoretical claim to the British throne. Sheila thinks this might be the start of increasing the Bavarian reign again over the oceans  She suggests to add a new line in the Bavarian amphem, „Rule Bavaria, Bavaria Rule the Waves“

And guess what, I just found a picture (2015) where the still deployed, proud „Utting“ is still in the harbour in Inning/Stegen.
Situated at the northern shore of the Ammersee. It is the partly visible boat on the right side of the picture. 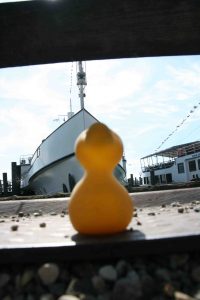 According to this iconic TV show, it es also a new valuable Biotope for the canal-rats. Even Charlemagne at the end ov the 9’th century had plans to built this waterway.