As the swarm is interested in aviation and as we came by the “Besucherpark” (visitor park) at the airport MUC (Franz Josef Strauß) several times we this time visited the exhibited historical planes there. Among them the replica (to original of Lufthansa D-Anoy which became world famous 1937 on its legendary pioneer flight to China “Pamirflug” no longer exists but other „Tante Ju“ (auntsy Ju). The plane was missed for some time after it was forced to make an emergency landing and it and the crew were barred and by that castaway for some weeks. In a situation of unrest short after Worldwar II. started in China 1937. Returning to Berlin they were celebrated like heroes and a very popular book was written about the trip by one of the pilots Freiherr von Gablenz. He died in a plane crash 1942.

I like this quote from the book a lot because it reminds me so much of my daily working routine. 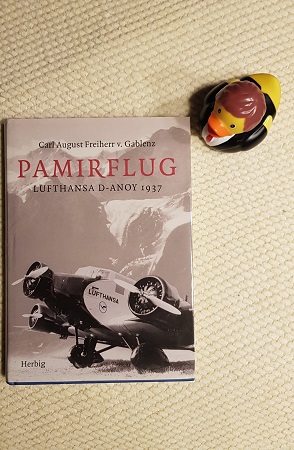 Pre-War (WW I. 1910) pilot “Eugen Von Tarnóczy” and painter painted 3 pictures of the adventure for the Deutsche Lufthansa (“Flug der D-Anoy über das Pamirgebirge”) while Hermann Göring (Meier) was promoting the Lufthansa. I am pretty sure that Göring knew the “Alter Adler” Tarnóczy. Tarnóczy before had also met Crown Prince Wilhelm (German Empire) and Freiherr Von Thüna after whom the plane for the Pamirflug 1911 was named at a manoeuvre at Döberitz Airport close to Berlin. Contrary to Wikipedia’s statement, that Eugen August von Tarnóczy retired 1912 as “Leutnant” (lieutenant) due to an illness, a newspaper interview from April 1974 (88 birthday) says he retired as “Hauptmann” (captain) after he was wounded in WWI. (>=1914). Tarnóczy moved to Traunstein where he lived as a professional painter after WWII. And here created a lot of pictures.

Here is one of his paintings from the Kleinarltal from spring 1945 when leftover German troops gathered in the area and Göring was nearby. “Föhntag im Kleinarltal”.

He painted the same scene 1935 but the picture of 1945 shows that he improved his skills in those 10 years. I also like the recognizable starting spring in 1945, a sign of hope in those dark times.

Adolf Hitler traveled a lot in a plane of that type during the “Machtergreifung” also when he was campaigning 1933 provided by the Deutsche Luft Hansa A.G. or Deutsche Lufthansa from 1933, organized by Erhard Milch. Milch was a longtime friend of Hermann Göring. Göring became air traffic minister 1933. Hermann Göring was not the blinded, dumb Anti-Semitist as Hitler. But he saw the advantages of sacrificing own citizens, stealing their money and businesses to emerge as a more brutal but strong, thousand years lasting nation and wealthy Führer at the end. That was long after Hitler had finished writing his book “Mein Kampf” in Landsberg am Lech and he published it in Munich.

The Takeover “Machtergreifung“ was more of a „Handover“ in steps.

And there are some more historic planes exhibited here at MUC airport „Franz Josef Strauß“.