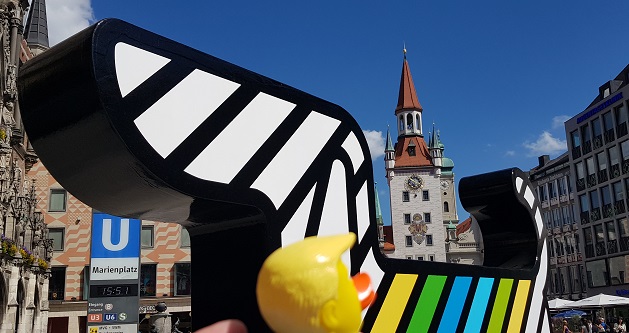 To commemorate the Olympic Games of 1972 the City of Munich set up a new piece of art in public spaces. They placed a giant Wiener-Dog, called Waldi (the iconic toy Wiener of the games 1972) on the Marienplatz.

Ronald D. was kicked out of the office only a short time ago. He illegally had tried, to take over the operation while not being under enough control during the Corona Pandemic. He thought, to improve his image in the public he should team up with a nice, cute pet. Though he never had one like this guy exept for some short contact with an American eagle. He thought, he should get himself a cute Wiener-Dog like Kennedy who had many pets. On his tourist trip through Europe. Poor Wiener Offie or later called Dunker however was abducted and sold in another country, in Den Hague, Netherlands. For 8 Gulden. 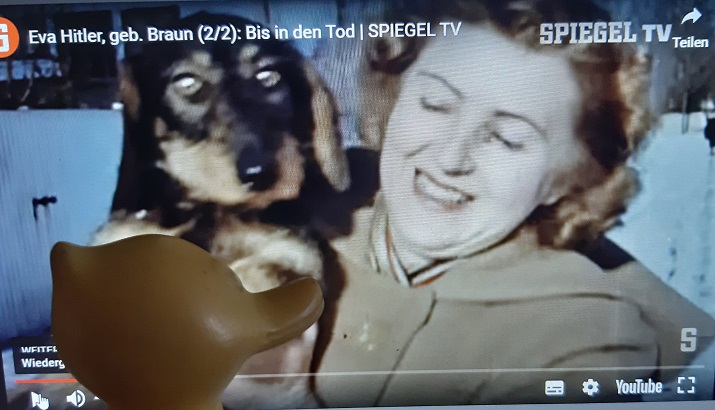 Waldi on the Marienplatz however cannot wear the original dress he was wearing 1972. The honorable Olympic Committee would have squeezed too much money out of Munich if the artist would have used the original colors.

Of course, we enjoyed some healthy snacks, nice music played by artists from Ukraine and cheered through the brave Bavarian knight who again kicked the mean one from Lorraine out of the saddle with his spear. At the chimes.

To finish the story, we also had a perfect chicken lunch at one of the few remaining former iconic Wienerwald restaurants in Germany. With branches even in the USA. Like in New York at the Broadway.

Not at all a „Greißlige Henn“ (no ugly chicken).   It’s unclear if Bavarian State President (Minsterpräsident) Franz Josef Strauß testified in New York against the involved diligent Ladies in court. After all the attention in the public.

The restaurant here in Germany even had a big garden with lovely chestnut trees. Formerly owned by the good friend of iconic politician president Franz Josef Strauß, Händl Jahn. (Friedrich Jahn) There was a committee of inquiry about some minor tax arbitration in Germany. Strauß had to testify 1990 but said, he had done nothing wrong. It hadn’t been him. 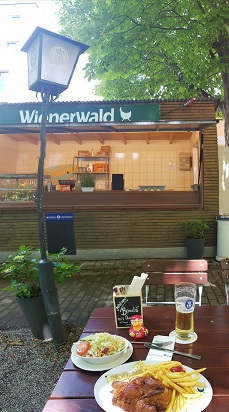