To follow our quest for Wittelsbacher Castles and Monument we recently went to Wasserburg am Inn with the famous river loop.

Wasserburg is situated amid the river loop of the River Inn, one of the major inflows of the Danube River originating in Austria.

The trip by train taking along my bike was a challenge. The last train stage from Grafing to Wasserburg in one of the older trains still operating in Germany was hard work. The entrance into the train requires to lift up the bike through a narrow door up on some stairs. A challenge but with Sheilas help I could handle the situation. The town itself has now train station. The last stage is shut down and a station about 4 km outside of the old town has to be used.

We went early in the morning eastward and Sheila enjoyed a nice sunrise through the front window of the old train.

Wasserburg was first mentioned in documents 1085 -1088 of Monastery St. Emmeram in Ratisbon (Regensburg) . It at that time belonged to the Counts of Attel. 1247 it was conquered by Wittelsbacher Duke Ludwig der Strenge. (Louis the Strict) who murdered his wife.

The city and it’s documents burned down 1339 so not much is known of the old times.

1552 the city was visited by the important celebrity Soliman from India who was serving emperor Maximilian II. (Habsburger).

Thanks to torn down bridges and a high water situation (which is not always bad) the town played an important role in fending off the Swedish troops 1632 in the Thirty Years War. It was a good source of toll income for the Wittelsbacher at the important waterway Inn.

The Old mediaeval City center is well preserved with many protected monuments and houses.

We started a walk across the old bridge 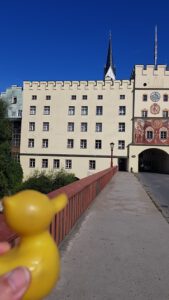 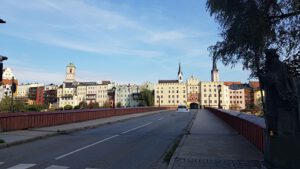 on the Panoramic Path up on the high river bank of the Inn, hoping we could get a nice picture of the famous River Loop at its most significant turn. 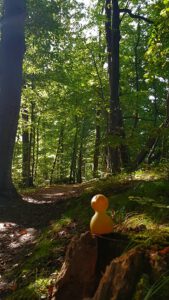 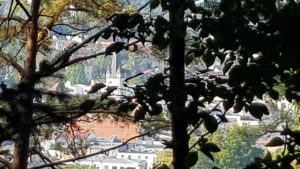 But the view was prevented by trees and bushes so we only got a picture more from the side at a special view point. (called “Schöne Aussicht” nice view) But the walk through the forest was pleasant and calm in the morning.

From the “Schöne Aussicht” we saw an inn direct at the River Inn “Paulaner”. This was where we went to have an early Bavarian lunch. 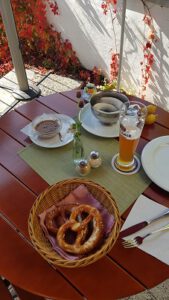 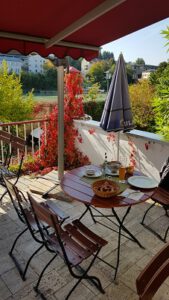 Later we had some ice cream and coffee at one of the many nice old places and enjoyed the hot weather in early October. 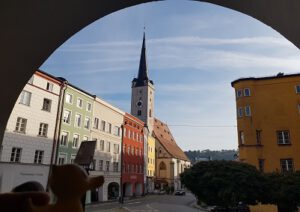 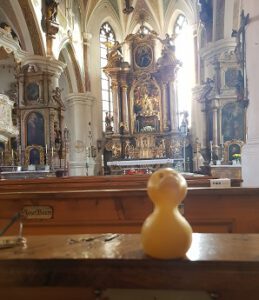 St. Michael (rare double church, two churches above each other)

St. Jakob with a famous Pulpit of the brothers Zürn 1635.

And walked up to the former Castle of the Wittelsbacher which is a senior home now. So we could only see it from outside. The neighboring church was closed too. Next to the castle the Wittelsbacher had build an old warehouse for grain to provide food for the town of Munich. 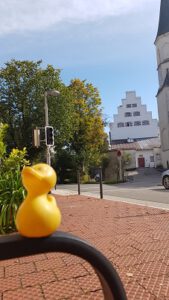 The old driveway to the castle and the old, now closed gate 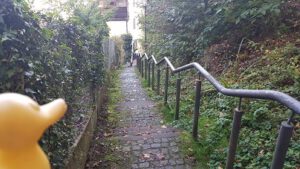 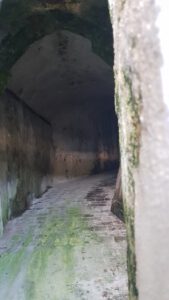