Cycling the big round Ammergauer mountains

Veröffentlicht am 27. November 2021 | Von 7803Sheila
Dampfnudel And Wieskirche
Booze For The Benefit Of The Public

The swarm went on a big cycling tour in and round the Ammergauer Alpen (mountain range). As we were going to travel throuh another country, Austra, I took along privy councillor Johann.

We started in Oberammergau on a cool Saturday morning and made the first stop in a textile store to buy some gloves which we didn’t had on us. I told the manager what tour I was planning today. I should have gotten more alert, when he said “oh the big round”. 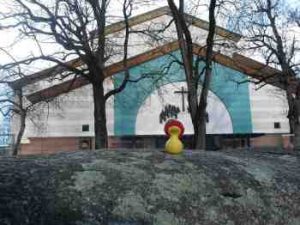 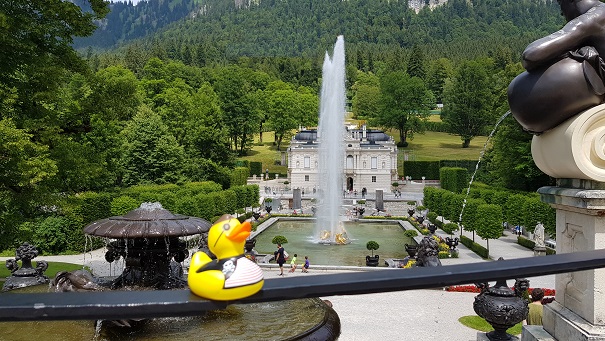 the old German frontier station and made a stop at the Ammerwald Alm which was closed to our disappointment. But we enjoyed the sun on the stretchers. 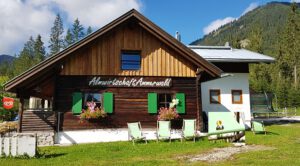 It is situated before the old Austrian frontier station. But after the Grenzbichl (border hill, frontier). The customs officers here had a boring time in the old days at least during some seasons. No houses around. Not much traffic here in the old days (smugglers and poachers of course) but now it is a popular tour for bikes and motorbikes.

Then we had some cake at the lovely Plansee and ordered a true “Jagatee” (which is a protected brand and may only contain Rum from Austria; now it even must be made from sugar cane, EUROPEAN laws; not the stuff Grandma used in the old days in her delicious cakes; Stroh Rum) 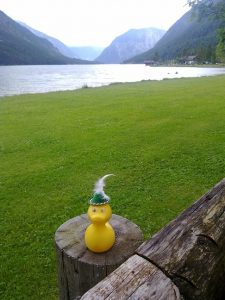 While cycling lightning fast along the winded street we noticed a peculiar street sign. And were not sure if we should continue. 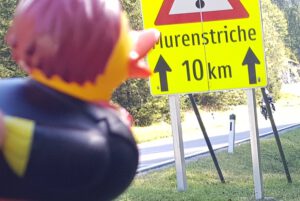 But we did, and went to Reute, Tyrol. Here we made our first mistake as we decided to visit striking Castle Ehrenberg. A nice and profitable toll station in the old days on the way south to Tyrol.

It belonged to the Staufer German King Konrad IV who wasn’t crowned emperor. His wife was Elizabeth Von Wittelsbach, mother of Konradin, the last Staufer. Who had a bad time in Napoli 1268.

That extra detour costed a lot of energy. But the castle was a great site. But when I told Envoy Johann, we were going to walk over the striking, famous new, walk on suspension bridge, the chicken ducked in my backpack. After he teamed up with a brown stripe.

The airspace was very busy that day. The “Bergwacht” (mountain rescue service) had to fly several helicopter-missions to save people during this sunny automn day. But the Austrian air-force was training too. Round the castle mountain. They deployed the highly manoeuvrable Alpha Jets which are used to distract hostile jets until some real, own jets are called in. 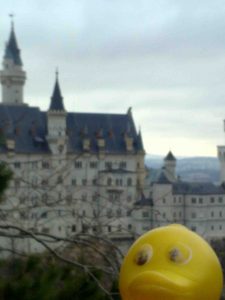 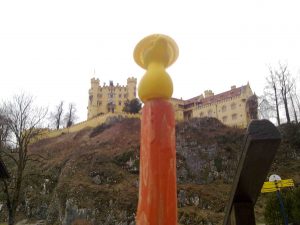 and Hohenschwangau (with a very busy parking lot) but had to hurry, as it was getting late.

(these are older pictures) 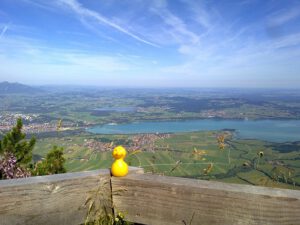 At Trauchgau we made our second mistake and decided to take the shorter bicycle path. Which again took us up into an unexpected, significant height. In the middle of the wood. Instead of driving to the Wieskirche.

As we also selected the wrong path. Which used up a lot of energy of my e-bike. I wasn’t sure if we would make it across the mountain. Johann was afraid, that he might have to push. We on the way passed a hunting hut village of which we still don’t know if it was set up by the Wittelsbacher who hunted here (Max II, Ludwig II., Prinzregent Luitpold, Maria (wife of Max, mother of Ludwig II.) hiked here too.

Ludwig (outstanding tall and good looking) and Max II. did not have a good relation.

Finally, we reached Unternogg and Altenau, back on the main street.

I was exhausted and filled up with some nice, tasty pork and 2 cool Radler in the Inn “Altenauer Dorfwirt”. Before continuing to Oberammergau without supporting electricity as we had run out of it.

A great tour all in all but too exciting and exhausting at the end.