Another heart lost in Heidelberg

Dieter joined me on a trip to Heidelberg where another heart was lost (song: Ich hab mein Herz in in Heidelberg verloren). To our delight we discovered a statue of Wittelsbacher Karl Theodor on the old bridge called “Alte Brücke” (old bridge) but also “Karl-Theodor Brücke” bridge. 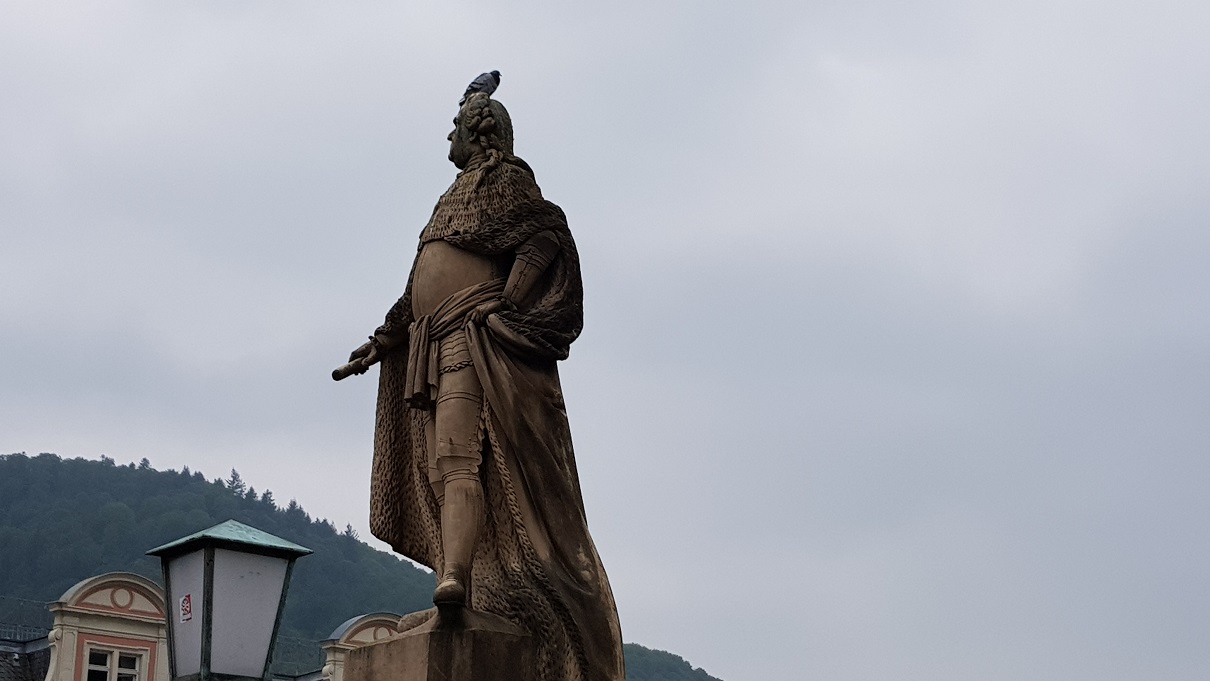 It is the ninth bridge at this place and this one was built by Karl-Theodor after the older one was destroyed by the catastrophic flood of February 1784. The winter 1783/1784 was extremely cold and one of the biggest disaster situations in the newer times after an outbreak of volcano Grímsvötn 1783 together with the Laki-craters in Iceland, darkening the sun in Europe and in the USA and of course in Iceland. The first bridge was built with wood in roman times but the Romans also soon later built a stone bridge. Karl-Theodor’s bridge was destroyed in WWII but soon after the war rebuilt with massive donations from the local population as it is a very profitable Kodak moment point (sorry, I am old) and a major attraction for tourism. Heidelberg with its universities has always been a popular place for international students who, of course also liked the German wine of the region and the romance of that lovely old town. It appears in many movies. The allegoric figures at the base symbolizing 4 rivers might with one figure even show the Isar instead of the Neckar river.

Next to the gate at the bridge is a statue of the “Heidelberger Brückanaffe” (bridge monkey), a guenon which shows his behind towards the mighty bishops of Mainz points out the fact that the reign of Mainz ended at this point. Touching the pointing finger of the guenon is supposed to bring good luck and fortune so of course Dieter had to do that.

The mirror is to remind people to reflect on themselves.

But it also reminds of the fact, that the Wittelsbacher rulers in Heidelberg also kept a guenon as a pet. A stuffed toy guenon is a popular souvenir from Heidelberg. The statue of Karl shows a flag at its base with the Palatine and Bavarian symbols as Wittelsbacher Palatine elector Karl – Theodor inherited Bavaria 1777. The Franconian comb is not there yet as Franconia first came to Bavaria in the Napoleon times. Here is Picture from inside the castle We used the time in Heidelberberg to go dancing in the Lutheran City Church Heiliggeist with DJ Pastor putting on the music. We went up again to the big old castle of the Palatine Wittelsbacher and went on a tour through the old walls which were severely damaged by Frensh troops of Ludwig XIV. while the other rulers were busy fighting in the second Turkish war in the east after saving Vienna. Like Wittelsbacher Max Emanuel, the Blue King. We went through the castle on tour guided by one of the old talkative ghosts. Of course Dieter also had to visit the famous big barrel in the castle and climb on it. Even Wittelsbacher elector Friedrich IV. of Palatine was not able to drink as much wine as fits into this big sucker but he died from his excessive abuse of alcohol. He is burried in the Heiliggeistkirche where he can enjoy music now. He is commemorated in this song. „Wütend Wälzt Sich Einst im Bette“ There are also some smaller Barrels. Son Friedrich V. is know as the Winterkönig as he was king in Bohemia (and wore the Wenzel crown) for only one winter before he had to flee from troops of emperor Ferdinand and of Bavaian elector Maximilian I, a Cousin of Friedrich. Friedrich was married to Elisabeth Stuart. the ancestress of all later Brittish  kings . And also Wittelsbacher Francis II. Friedrich IV. suffered from Malaria which he caught in the swamps of Heidelberg. The Thirty Years war 1618-1648 ended with the Peace/Treaty of Westphalia after difficult negotiations.