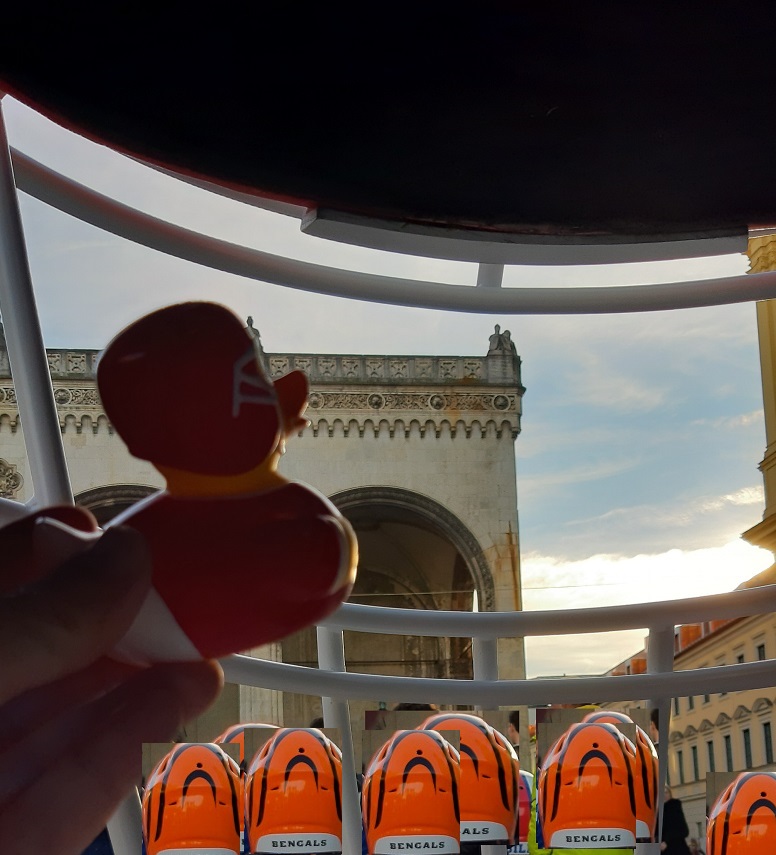 A new, contagious fever has broken out in Munich. We are facing the first NFL Football away match here in Munich this weekend. Prices are high, about 463 Euro on the grey market now. Too high for us.

The first cool challanges have already been mastered. Rachel Bonnetta has already beautifully mastered the „Eisbachwelle„. And she indeed shined. But I supect, Sheila was braver.

Brady’s equipment is complete too now.

We joined a pre-season promotion event at the Odeonsplatz in front of the Feldherrnhalle We tried to buy one of those NFL Team Rubber Duckies. After queuing for some time, the incompetent gal at the souvenir stand however could not help us. Though smiling charmingly. She suggested we should try our luck in front of the Arena, where the game is going to take place Sunday November 13’th. 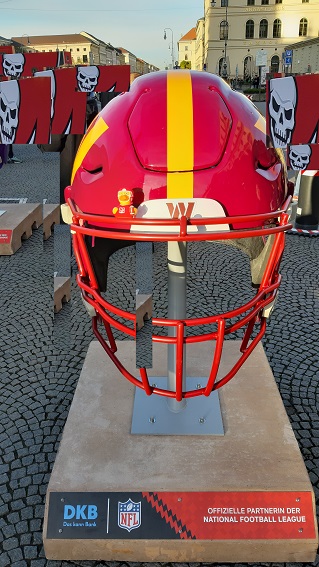 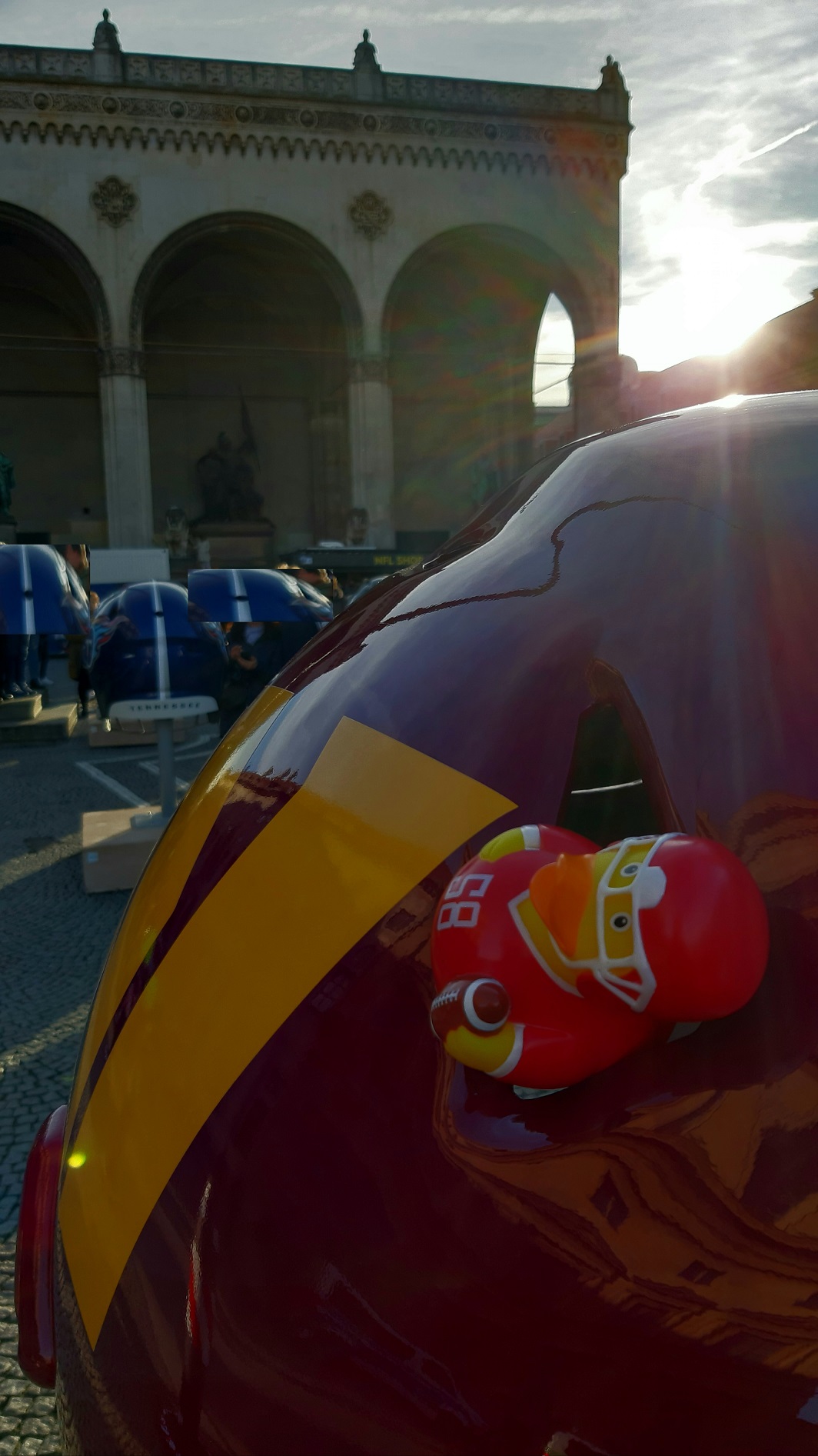 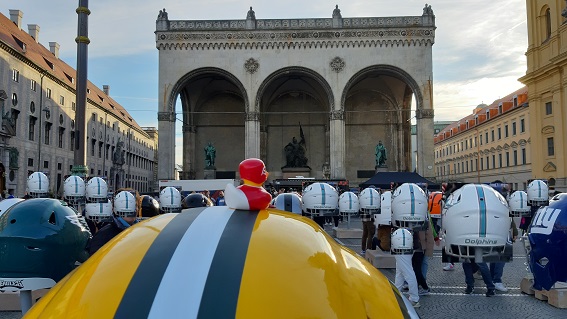 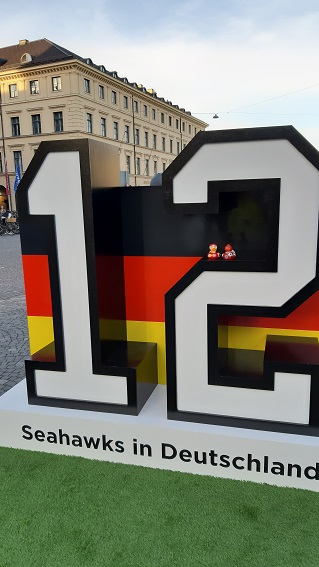 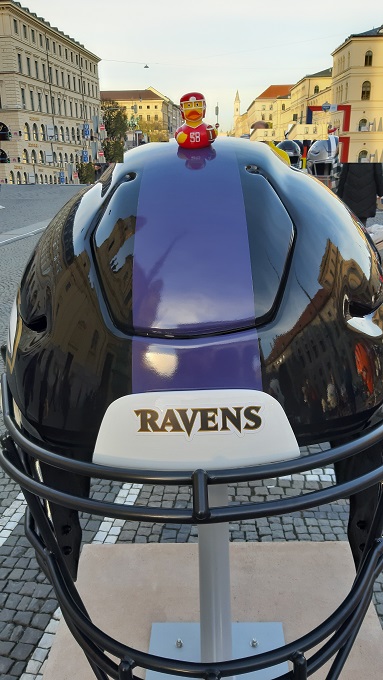 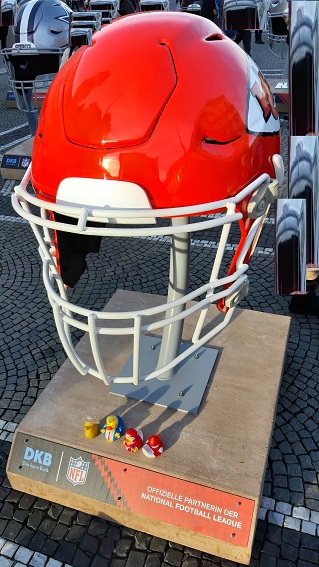 Ronald, looking for new perspectives and to improve his geocraphical knowledge, was joining too.

Our favorite Team of course are the KC Chiefs and here in Bavaria the Fursty Razorbacks. Though I have been in KC 8 times I never made it to the CHIEFS KINGDOM Arrowhead stadium. But we attended a game of the Kansas Jayhawks in the late 1980’ties.

Rumors have it, the game is also sponsored by a rollator producing company, but age was no issue last year and it should not be this year.

Now we are also exited to see, which German stars will appear in the opening ceremony or half time break. We are hoping for some “Schuhplattler” or “Goaslschnalzer” or other German celebrities. Interesting also if they will play the Stars Spangled Banner at the opening of the game. So, we all better should learn the proper etiquette and the words. Pumpkin Pie is not too popular here. Interesting also if buying and drinking of beer will be allowed during the whole game.

Unfortunately, the KC Chiefs, our favorite team is not here but we could get a picture of DT with the helmet of the Chiefs, standing on top of the helmet of the Colorado Broncos. And some more pictures in the nice, sunny evening.

As we learned that the NFL Football Teams had set up outposts here in the Inns in Munich, even if the own team is not playing tomorrow afternoon 13.11.2022, we went to town and visited the outpost of the KC CHIEFS KINGDOM. We enjoyed a tasty “Weißwuaschtfrühstück” in the “Klosterwirt” next to the Frauendom. And some Augustiner beer for the benefit of the public. Ronald, who doesn’t like alcohol and is busy with some unpleasant legal business, also in Florida, was not joining this day. 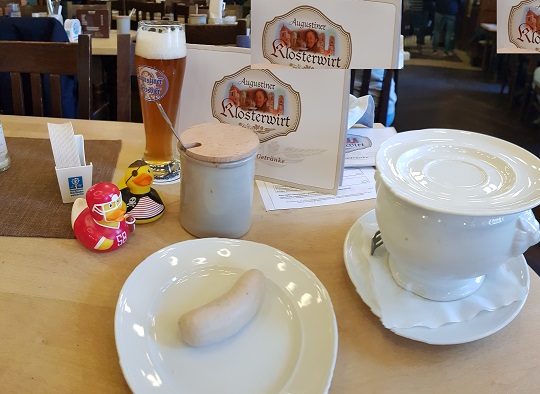 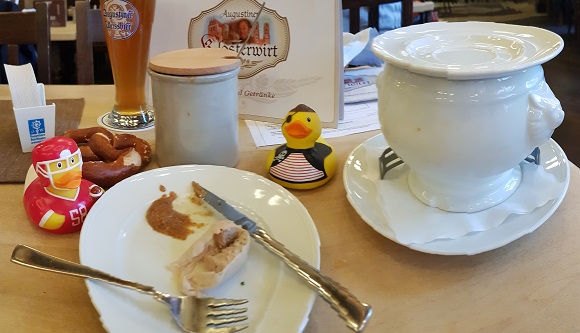 The „Weißwürscht“ came with White Sausage Pliers to avoid a Fumble or incomplete pass.

We finished with a wonderful Creme Brule. 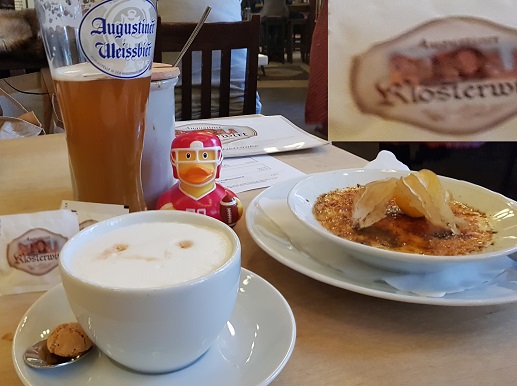 But we did not see any fans from the Chiefs inside but some of the Tampa Bay Buccaneers. Maybe the time was too early for the Chiefs suffering from time lacking. But we later saw some on the streets. But more Seattle Seahawks and some Buccaneers. 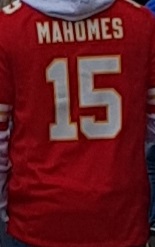 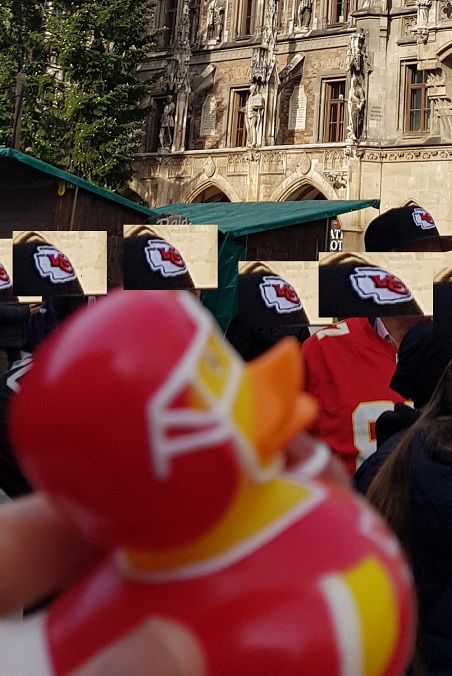 I decided “I schau ma de Touristen oh, beim Glockenspui am Marienplatz“, we watched some Seahawks watching the top of the line tourist event. (chimes) No Tailgates are needed here in Munich to have a Tailgating Party. 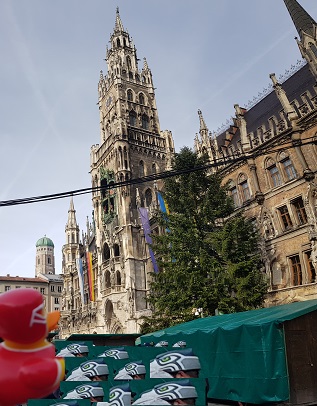 As Christmas is approaching, the tree had already been set up. And the stands for the Christmas market.

The Seahawk’s outpost is in the Augustiner Inn, in the Neuhauser Str. Where the fans can booze for the benefit of the public.

The Buccaneers have conquered the Hofbräuhaus.

Jack Blackbird of course favors the Buccaneers, and he rubbed the nose of the Luck Lion at the Residenz for good luck. As Sheila did before on other occasions. As the lions are barely older than Brady, a lot of luck will be needed. 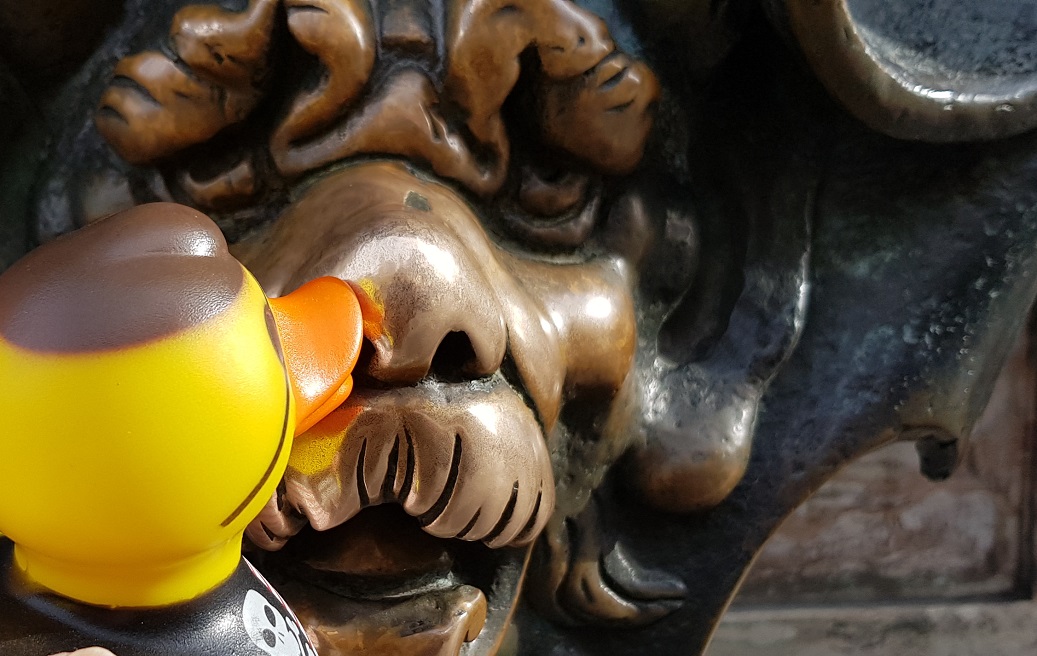 We as million others watched the event on TV. The mood and athmosphere in the stadium was great. Both teams appeared a bit tired but the Buccaneers woke up earlier. The Krauts and foreigners were quite loud but, far away from the experience in Arrowhead.

We thank the two great American Teams to let us participate in this great experience and we promise, we will continue to buy merchandise franchise team Ducks whenever we come across them.

We don’t expect to see German American Football Teams playing on that level during my lifetime.

We also saw Mausdoadschmatzer (bullshitter) Bavarian Prime Minister Söder, but fortunately did not have to listen to him. His Selfie during the coin flipping however caused a lot of laughter. 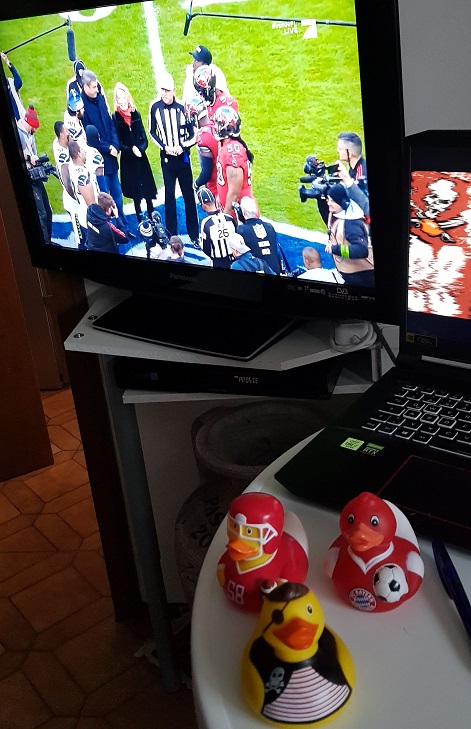 And we don’t understand, why we had to listen to the German Anthem. Hopefully we won’t see that in the soccer Bundesliga.

We enjoyed the game, which only got a little bit exiting at the end. We enjoyed some beer even during the 4’th quater. Bottled one only, no Draft beer. And some pizza which was just ok but not spectacular.

The luck lions at the Residenz did a good job. Brady and his Buccaneers were dominating the game and won. 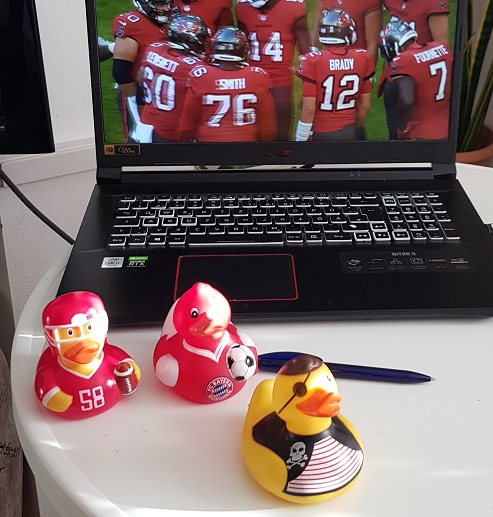 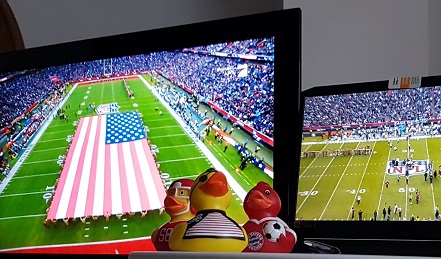