I suggest, to play this music as this story is based on that song.

Now that I am older I appreciate more and more the beauty of my Upper Bavarian home. The mountains, rivers, many green Beer Gardens with their chestnut trees. The simple pleasure of a pancake soup. With Bavarian Beer.

And as we can’t travel much in those new times we discovered, it is not needed. So we decided to follow the turn of the Isar river and the Isarflimmern.

Confluence of the Isar river springs

Update: 18.09.2021 The swarm insisted to complete the story about Munich’s iconic river Isar which starts “Hoch drobn im Karwendelgebirg” (high up in the Karwendel mountain range”. It mouths into the already longer Lafatscher brook at that point in the Hinterautal in Tirol, Austria. But fortunately received the name Isar. Munich at the Isar sounds much nicer than Munich at the Lafatscher. But there is a dispute about the origin of the Isar River.

It is “so wuid hinter[..?..] Scharnitz” (a wild, natural river behind and also in front of Scharnitz).

This Marterl (typical roadside shrine with a niche for a crucifix or saint’s image or a picture with a story of somebody who died at the place) here shows the dangers of being a hunter in a world full of poachers and romance.

The hunter here though died from a brain stroke, like Wittelsbacher Emperor Ludwig der Bayer. 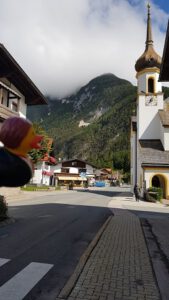 We also visited the Finzbachklamm (gorge, not the Grand Canyon but pretty). We saw many squirrels enjoying the spring but also a dead mouse on the way pushing my bike up. Maybe stepped on and killed by one of those notorious mountain runners. With Wittelsbacher Prinzregent Luitpold who really hunted in this area/enclosure. And with Marianne und Michael. There is not too much to say about the village Bairawies but it is mentioned in the song. We stopped next to a bee keeper which I noticed after taking this picture.

On the dangerous way to Beirawies we also crossed the little village “Einöd” (one-horse town).

An “Einöd“ also appears in Jäger von Fall. And Marianne and Michael. The cultural tolarance to minorities is notorious in Bavaria. We think, we should cherish nature more and that it should be possible to drink water out of the rivers from the spring to the mouth in the sea.

Rumors have it, that either Wittelsbacher King of Bavaria Ludwig I. or his son King Otto I. of Greece had a Lady Jane too. Maybe both.