Repeated Pilgrimage, back on Holy Mountain 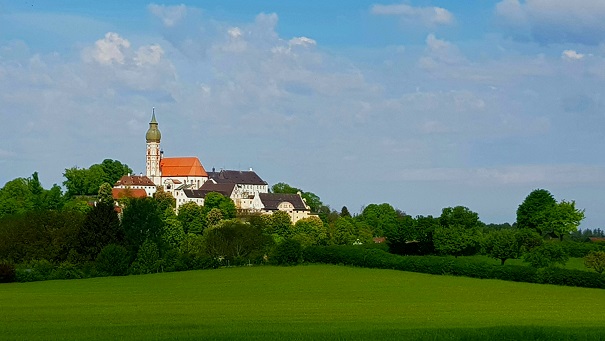 After the swarm recently went on a pilgrimage on holey ground, we went on another one. Up on the Holy Mountain of Monastery Andechs. Which holds the current burial site of the Wittelsbacher Dynasty. (Not accessible for the public)

Approaching the place, we found out, there are nerds everywhere.

The place used to be a possession of the wealthy Dynasty of the Andechs Meraner who lost their position in the empire after the blame for the murder of Staufer heir Phlipp of Swabia in Bamberg was put on them.

The place was taken over by the Wittelsbacher They started a pilgrimage site here after miraculously some relicts were discovered under the old altar. It became a rewarding business for the Wittelsbacher after they founded a Benedictine Monastery 1455 under Wittelsbacher Duke Albrecht III.

The story is told on some big panels in front of the church of the monastery next to the new souvenir shop.

The most important, embarrassing fact however is spared: Who murdered Philipp of Swabia in Bamberg 1208. A bloody job with a sword, because of vile jealousy.

That was Wittelsbacher Count Otto VIII. (a cousin of Duke Otto I, the first Wittelsbacher who ruled in Bavaria). And why Castle Oberwittelsbach had to be given up. And the fact about the brutal execution of Count Otto on at the Danube River in the following.

Half news can be fake news too.

The Wittelbacher showed a lot of their pragmatism and changed sides several times at that time. While the Staufer and the Welfen were fighting for the lead in the German Empire.

We enjoyed the intersting historical facts, the restaurant and the church.

We shared a lamb knuckle.

Sheila got a cup with icecream, a „Schwarzwaldbecher“ (Blackforest) 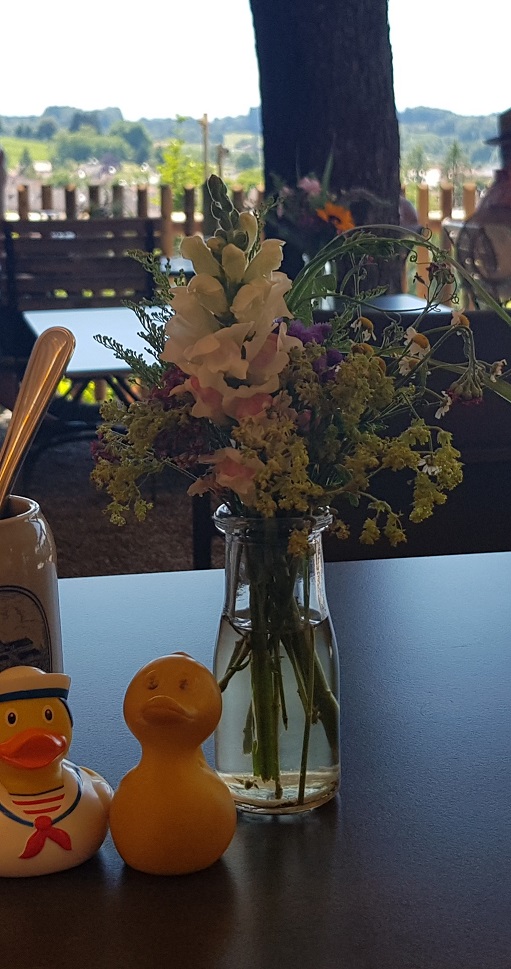 So, we once again enjoyed the spiritual mood of the place and the good beer. Which is a main part of every Pilgrimage in Bavaria. And maybe the reason why many Pilgrimages were later forbidden under Wittelsbacher rule during the era of enlightenment. (Maximilian III., Karl Theodor)

The monastery was dissolved during the secularization and sold to different owners later. Some earned a lot of money in the process. Interesting is one owner: Freiherr von Jordan. There are speculations, that his wife had an affair with good King Maximilian I. of Bavaria. Jordan and his wife might have exploited the fact, that the women had a child which might have stemmed from Max. The girl, Karolina, died early and was later found and scanned in the luggage scanner at airport Munich, Franz. Josef Strauß. By Alfred Rieperdinger. Jordan’s other daughter Mathilde inherited her mother’s beauty and a painting of Mathilde Freiin von Jordan is in King Ludwig’s I. Galery of Beauties.

But the Pilgrimage was started again und Wittelsbacher King Ludwig I. who had to make up for his many sins.

After the Pilgrimage we continued and dropped into the Blacksmith Workshop party in Andechs. (550 year anniversary). Of course, with more beer and brass music.

The workshop can be visited at some specific days and you can learn how to forge.

We took another break at the shore of the lake at the Harbor of Herrsching.

Sheila got another cup of icecream as we had to wait for the ship. 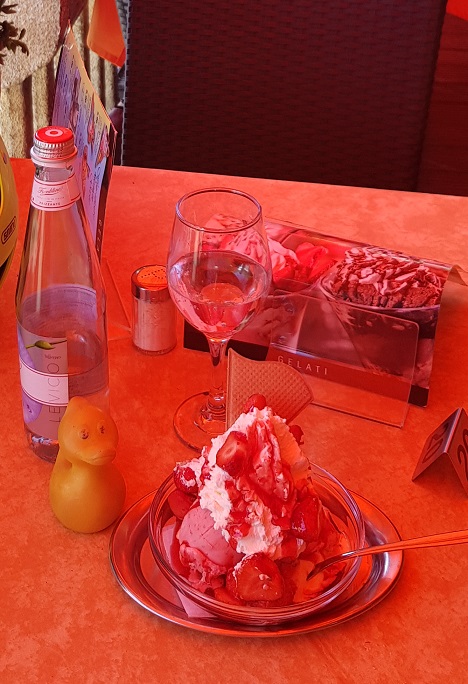 Then we decided to take the paddle wheel ship from Herrsching to Stegen at the Ammersee to enjoy the nice day. And the hundreds of sustainable sailboats on the Ammersee. And many more at the shores of the lake. In the environmentally valuable reed belt.

Of course, the skippers all came walking there from Munich or from their 3’rd or fourth holiday homes. Or by bike or with the public transport system.

Sheila as always did the necessary safty checks.

Deckman Heinje supervised the porpper opperation of the paddle wheels.

The swarm had to be satisfied with the beautiful paddle wheel ship and had a lot of fun working its way through the sailboats and even people swimming in the lake.

We casted anchor at the town Utting, after which some of the great Bavarian Navy was named.

When we continued, I for the first time heard the following warning. From the captain: Take care, the back of the ship veers off.

Suddenly a strange woman was lying in the pond next to the paddles of the ship.

We got off the boat at Stegen and continued to Grafrath where we had lunch during a perilous storm just some days ago. But got disoriented and did not find the train station. We continued to Schöngeising. We just learned that another Duck went on an epic trip to Olching just some days ago from here. The event was in the news and on Facebook.