Members of the Swarm, some noble, visited another interesting destination east of Munich by train 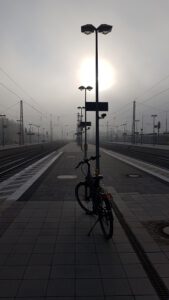 (we were on the wrong train, an Austrian Fast train and therefore had to get off and change in foggy Rosenheim)

The sky was clear in Munich and the weather prediction was good when we started the trip. But reaching our destination east of the “Chiemsee” Lake (Bavarian Sea) we came into a soup of thick fog. The fog was still lying over the lakes and rivers. (Поплыли туманы над рекой) But the swarm insisted to continue nevertheless to enjoy the nice views overlooking the lakes and the Bavarian Alps. 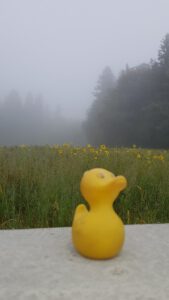 Sheila looking for some sun. 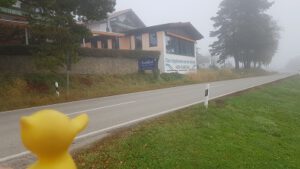 So we went on another panoramic route without panorama at first.

But the weather was getting better at lunchtime, and we had a great tour with several great surprises.

We were able to use one of the rare tow ferrys across the “Alz” river and had to use the WLANS to call the Ferry man in the neighboring Inn to pick us up and sail us across the river.

WLANS = Wired Lines and attached Sheep Bells. An old reliable way to communicate while those modern stuff like Facebook etc. tends to let you down when you need it. And causes significant financial damage.

The bells sound like this performance at some of our friends.

The little but reliable ferry is operated by enthusiasts on a honorary basis. 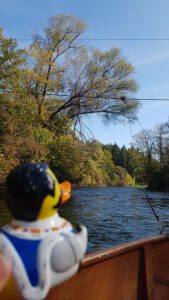 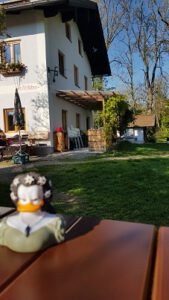 (hoi me ab, pick me up and take me across the Alz River

We also had a delicious meal in the Inn next to the Ferry. Sissi was not amused about the fact, that I had roasted Duck but I enjoyed it. Sad was, when I left the restaurant, another Duck on the compound was quacking desperately and I don’t know about its relation to my meal. They had some ducks there, some goats and chicken to entertain the visitors. The Inn is some way away from the next village. It was extremely busy that day as they put up a wedding party.

And the Ferry Man was called down to the river too, many times by the most streamlined WLANS..

During the trip we also came across some Fake News from Russia. Which was turned into even worse Fake News in the USA. We visited Monastery Seeon 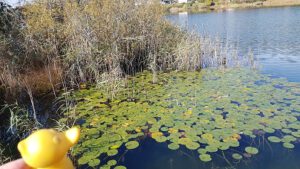 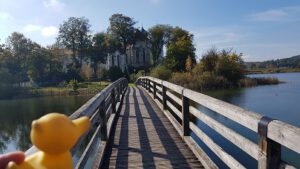 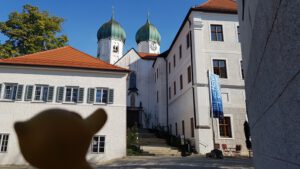 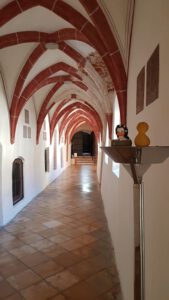 (today a education center owned by the District of Upper Bavaria)

where Anastasia is buried and remembered at a prominent place in the neighboring church St. Walburg. She pretended to be a daughter of Nikolas II. and that she could escape the massacre of the Romanow Family. She was not, which could be proved recently by genetic tests. 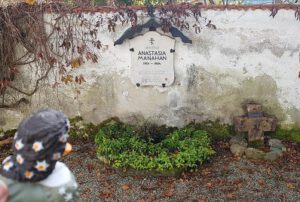 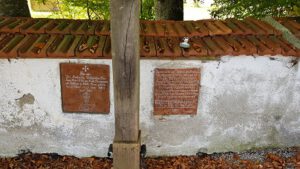 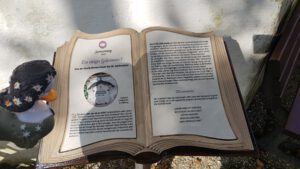 settled down at „Monastery Seeon„. Wittelsbacher good King Max I. had his daughters marry prominent noble men and one daughter, Princess Auguste Amalie had to marry Napoleon’s stepson Beauharnais. Who was installed as Vice-King in Italy. Even after Napoleon’s fall and Eugenes Beauhanais being kicked out of his kingdom, it turned out, to be a good investment for the Wittelsbacher. The couple had to be put up in Bavaria after Napoleon’ ruin. Receiving the new title Dukes of Leuchtenberg and Prince of Eichstätt. With land and income in Eichstätt and Friedberg and a palace in Munich. Heir Ludwig I. , next Bavarian king was not amused at the beginning. A new noble Dynasty started. But only lasted 200 years. At least one daughter of the couple married the Swedish King Oscar and become mother of all Scandinavian kingdoms and queen.

On the way we also passed the village „Wattenham“. Which means they are playing the popular card game Watten here with the highest card being the „Maxl“, named after King Max I. 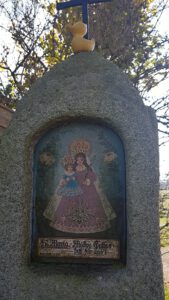 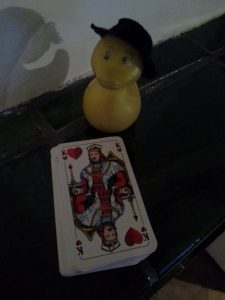 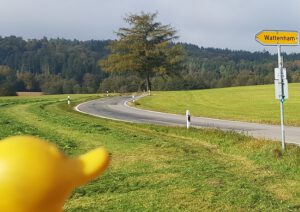 Brother Auguste married the Queen of Portugal 1934 and became prince consort. But died soon, maybe because of an influenza 1835. “Angina”

Another daughter, Amélie married the emperor of Brasilia Dom Pedro I. a notorious womanizer before he married his second wife after his first wife had died.

Amélie, a loving mother for her 6 official stepchildren of Dom Pedro (not so for his illigitimate ones),  who did not marry again, 1852 bought Monastery Seeon after her husband and she were kicked out of Brasilia 1831. Her husband died soon after leaving Brasilia, wars in Portugal and Tuberculosis 1834. And the couple had no own surviving children (the one daughter died early). Pedros dead body was moved to Brasil later but his heart stayed in Portugal until today, 22.08.2022. Tooday it was moved to Brasil.

Amélie bequeathed the Monastery to her Russian nieces. This is, how the Romanows got here. They had a tongue for arts and music.

And why „Anastasia??“ later ended here by the help of  American Fake News although she was no Romanow and why she is commemorated with a memorial plate in the cemetery.

Duke Nikolaus of Leuchtenberg (1896-1937) later conducted a Don Kosaken Choir in Munich, by the name “Ataman General Kaledin“. Who was a White Russian Hero for the Russian refugees after WWI. Fighting and losing against the Bolsheviks

Wolfgang Amadeus Mozart also had friends here and stayed here in Seeon several times. He even composed some music here and is said to have been sitting under this oak tree. Now the “Mozart-Oak”. Sheila of course had to sit under that oak too. After learning about the Operation Oak of 1943. 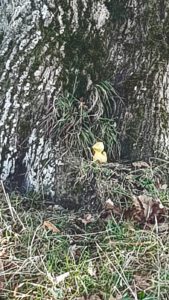 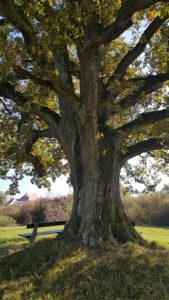 On the path next to the tree Sheila noticed this littel critter trying to cross the path. And got scared that sombody may step on the little fellow. So I had to put it on a leaf and tow it to the other side like a ferry man. 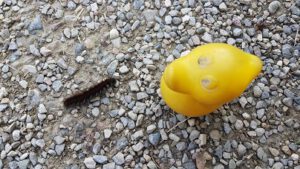 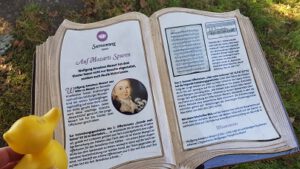 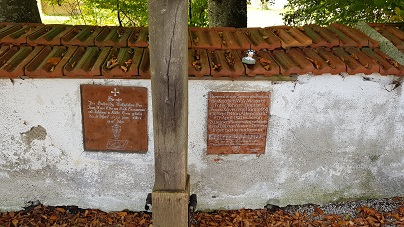 We continued our bicycle tour to the town “Stein an der Traun” which was also part of the possessions of the Romanows. But we could not visit the “Höhlenburg” (cave castle) here as it is a school now and not open to the public without reservation as we found out after some search. The Romanows had a lot of parties here and art events and spent a lot of money. But later had to sell the compound as they lost their possessions in Russia.

We spent too much time here and had a hard time to later make it to the town “Übersee at the Chiemsee where we wanted to catch the train back home. But I could take some nice pictures at dusk with some ducks at the Chiemsee.

Here is some music from another Don Kosaken Choir. 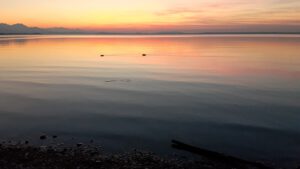 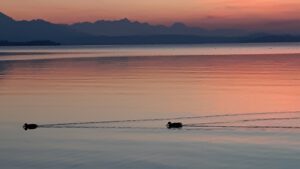 Night had fallen fast. Fog was rising and it was getting cold. In the darkness we had problems to find the route at the end for the last 5 km. But to warm up, we took a break in a fast-food restaurant, had coffee, and a burger and managed the last miles cycling on the dark highway not able to look at the map in the darkness.