As the swarm had visited many places where GröFaZ Adolf Hitler had stayed (Petersberg, Adlernest, Prinzregentenplatz, House of Eva Braun, Osteria Italiana, Oberammergau, Munich Airport Riem, Königsplatz, Haus der Kunst Munich,  Stadelheim Prison, Prison Landsberg, …) we thought we should visit the place, where he was born. The town Braunau am Inn (at the Inn River). 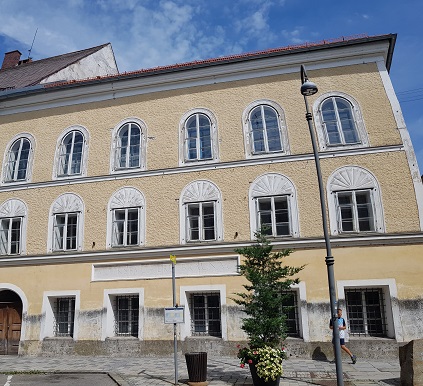 And the church where he was baptized. St. Stephan. 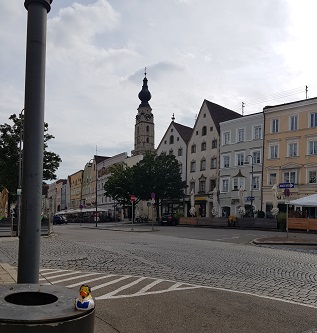 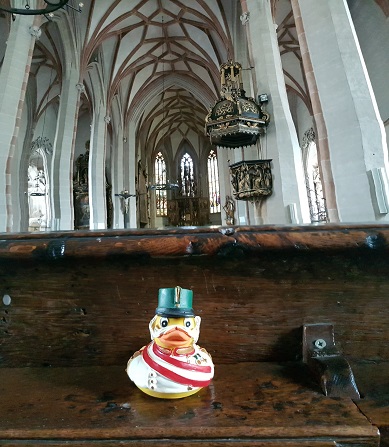 The church is not as high as some sources wrongly state. Just as GröFaZ was not a such big leader as often stated. And other leaders. But if you are wealthy and rich, it is easy to create alternative facts. (Fake news, with a yard full of Duck Houses)

We found a nice coffee shop across the street from the house where Hitler was born and where we had some brown coffee, and a dark brown Sacher Cake. Close to the shore of the Green Inn River. 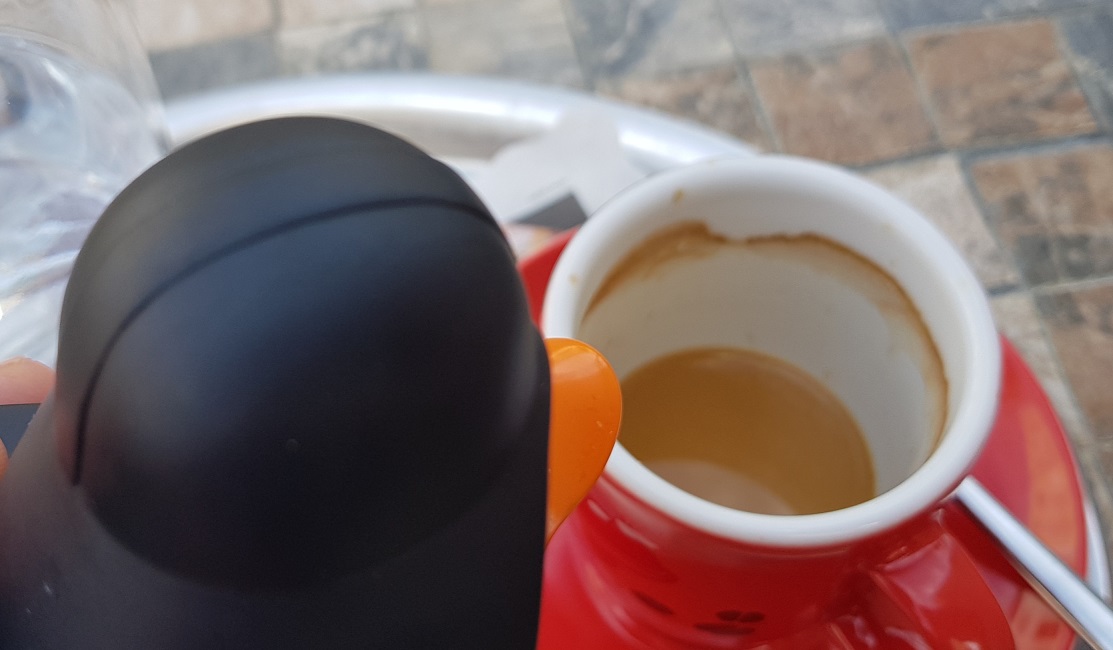 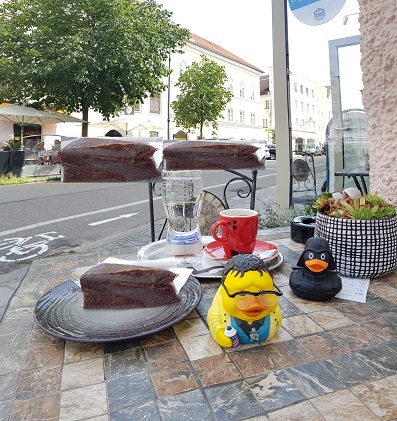 Braunau for a long time belonged to Bavaria. Not sooner than 1779 it was given to the Austrian Habsburger together with the Innviertel (Inn River Quarter). Following the Austrian Heritage War and the Bavarian Heritage war (Bavaria: Potato War. Only for a short time during the rule of Napoleon 1810-1816 Napoleon gave it back to the Bavarians. 1938 it was connected to the German Empire again under the rule of Adolf Hitler.

The Inn River is a mighty river. It carries much more water than the Danube River down to the confluence into the Danube River at ”Passau” in Bavaria at the Austrian Border. It might cause severe flooding but memories blur as there are new catastrophes every few years. 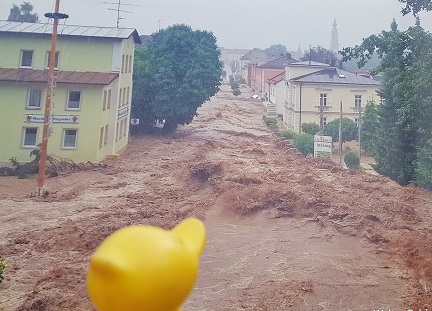 Adolf Hitlers father Alois (whose father is unclear) worked as a customs officer at the Austrian/Bavarian Border. Now, with the EU in place, this customs office Braunau/Simbach is no longer operating. The building is used as a museum now. We visited that too as we are interested in Photography.

We liked this installation: (Stromaufwärts) Upstream which reminded us of Holy St. Emmeram. He floated upstream even after he was dead and without arms and legs.

We saw that statue of the “Cock Walter” on the long bridge across the Inn River. The Cock was named Walter and had a sad end. As he had to be killed because of bureaucracy on the bridge between Bavaria and Austria. June 29’th 1918 he made it on the headlines of some newspapers together with Czar and other celebrities.

But that’s the way for most of them chicken.

We found more pieces of art in or at the enlarged riverbed of the Inn: 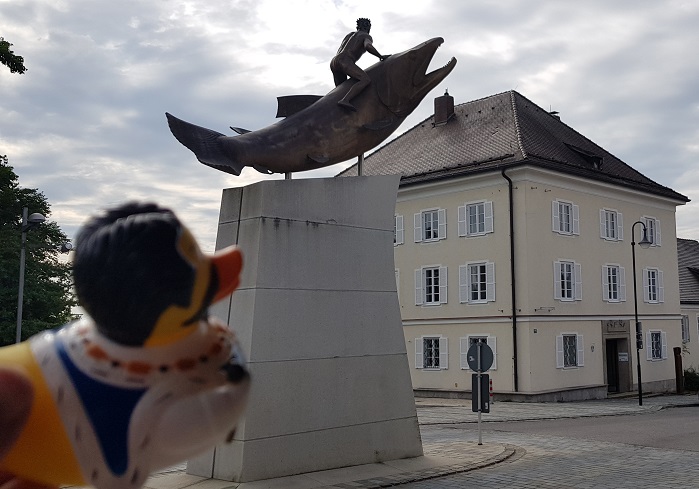 And some yellow balls with metallic chairs on top which the swarm had to check out. It seems to be part of the museum Museum-Zollhaus.

A nice, big Steam Locomotive at the train station.

The 200 years old Wittelsbacher Oak Tree in the towns center.

We stayed in the nice, comfortable Inn “Wimmer Weißbräu” in the center of Simbach and enjoyed a good lunch with some Accordion live music. Bikers and Motor Bikers are welcome. We met one former motorcycle sport champion from the Netherlands and talked about travelling and the burdens of the presence.

He said, he is a long-distance runner now and already covered some 90.000 kilometer running. More than Forest Gump. That’s probably more than Sheila drove by car. Amazing. I stated, we are still in a very good condition compared to some “Shithole Countries” and should not complain too much. Compared with the situation like the Thirty Years War or during the Spanish Flu which came from Kansas.

We however had to tolerate some cute Teddy-Bears sitting at the table next to us.

We started our stay in Simbach in the nice Inn Murauer at the district of Simbach called “Antersdorf” (Anter = male duck) with a tasty healthy lunch. Unfortunately we could not get the last available room there. Booking . com was faster as we learned.