As the swarm was not satisfied with only one picture from Burghausen, we had to sent another team to this important town. In August 2022.

No duckomentation about the Wittelsbacher Dynsasty would be complete without mentioning the longest castle in Europe, “Castel Burghausen” (1051 m). „Castle Zu Burghausen“

Walking through the castle (access only at one side, at least we did not find a second one) in the summer heat was quite a challange. I should have braught my bike. But the walk provided for many spactacular views. In all directions.

On the way to Burghausen by train we changed in Mühldorf am Inn. Mühldorf is a importen train Hub for the South East of Bavaria. We were surprised, that we came through many towns which were all calle „5 Minuten später“ (five minutes later). In Mühldorf or close to Mühldorf 1 (2?) important battles with Wittelsbacher participation took place:

Entrance with one more museum (photagraphy, which we skipped)

House, which reminded us of Hoggwarts castle.

View northwestern side (swimming pool side) 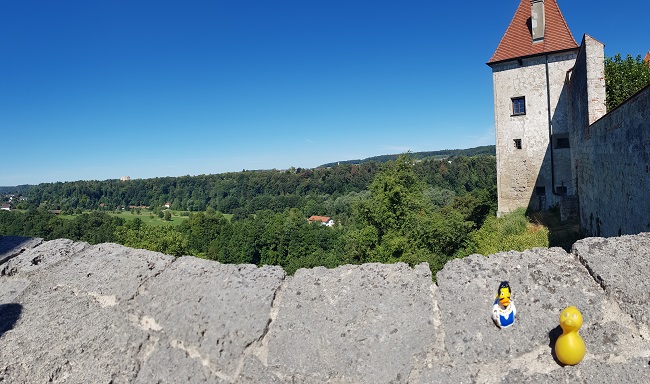 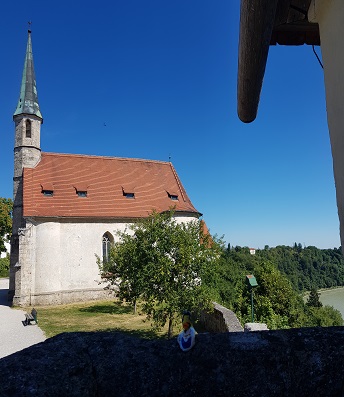 We had a good lunch here in the castle, in the „Burg Café“ in the serviced area. There is also a self service area. Not as expensive as in Munich.

I did not count all the courts lined up and connected with Gates and tow bridges. But there are many.

They have a shop here too, a little older than amazon.

Burghausen is situated at the river Salzach (at the German/Austrian border) which was important for Salt Trade and a good source of income for the Wittelsbacher Dynasty.

There seem to be a number of private homes and apartements now in the old castle. The modern inhabitants can also drive their cars into and through the castle. A nice place to live.

Scholar/ historian Aventinus  1477 (+1534), lived here, born in Abensberg and buried in Regensburg lived in the Castle for some time.

Next place we visited is a tower which was the old prison, interrogation room, torture dungeon and  exhecution site. Where the Wittelsbacher had fun. It required an extra ticket.

A big oven is included too in the house to get rid of the executed easy.

Until 1813, still under the rule of good king Maximilian (Max Joseph) I. torture was a legal means in Bavaria to get confessions. Some of the old tools and furniture of the Wittelsbacher family are still visible in the castle. Which helped to make the indicted sing.

A small cell which could be heated from outside to grill the inmates is also still there. A dungeon is available too with only one opening in the ceiling. Here the inmates of the dungeon could enjoy the entertainment going on above in the torture chamber. Knowing, he would be the next one to be treated.

Following the entertainment in the torture chamber above your cell waiting for your treatment.

I havn’t seen any chairs like that at IKEA. Nor such a kitchen tool like the Thumbscrew.

And we don’t know what’s behind this looked door, maybe the resent masters chamber. Some tortured ghosts, a Sauna or a brewery?

Kempten Im Allgäu (City of Kempten) was a place too, where one of the last witches was convicted in Bavaria 1755. Burghausen still had a witch 1751.

We then visited two museums in the castle in the old main living complex of the Dukes.

Due to the big spending of Hedwig Jagiellonica (1457-1502), wife of Wittelsbacher Duke George the Rich, George was not as rich in the end as before. The wedding in Landshut also costed a lot, a today’s worth of 22 million Euros 1475. Emperor Frederic III., one of 9000 guests, led the bride to the altar. 323 oxen were grilled, much more than in the Ochsenbraterei at the Oktoberfest in a normal year. The dowry of the Polish bride was also not paid as agreed on. Maybe therfor he could not cope with Albrecht IV. at the end. Women.

Some old iron helmets which Sheila tried to put on.

Like the battle at Mühldorf, 1257/1258 where the Bavarian Duke Heinrich XIII. together with his brother Ludwig der Strenge punished Austrian and Bohemian troops who had invaded and devastated Bavaria but stopped before Landshut and turned round.

It shows, how important bridges are in wars. The Austrians tried to retreat over a wooden bridge but it collapsed. The rest of the remaining troops were burned in Mühldorf. However, there is some fake news in that picture. It shows Alpine mountains behind the river and Mühldorf. But the mountains are on the other side. But it ads more drame to the picture. 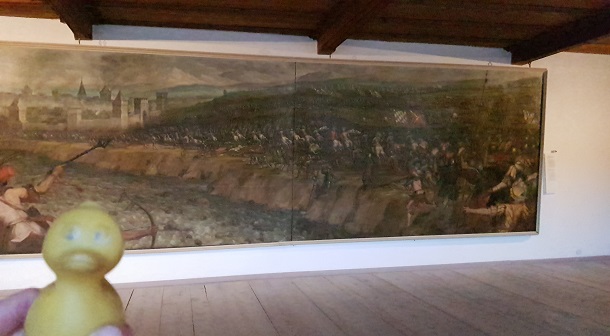 They also got one from the famous Battle at Ampfing with emperor Ludwig der Bayer (the Bavarian) as winner versus Friedrich der Schöne. (the beautiful, Habsburg).

Later Duke Georg and Hedwig did not have legitimate male heirs and Georg tried to bequeath his possessions to his daughter which was married to a Wittelsbacher from the Palatine line. Not regarding the old heritage house rule of the Wittelsbacher. With a claim of Wittelsbacher Albrecht IV. (Who is known in connection with beer. Münchner Reinheitsgebot, Bayerisches Reinheitsgebot) It ended with the Landshuter Heritage War. Which Albrecht IV. could win but which ended with territorial losses in Palatine and Bavaria in favor of the Habsburger.

And more familiy members. Which will cause the swarm to go on further trips.

We also saw a wooden relief of artist and engineer Erasmus Grasser who lived in Munich.

And in the other museum some information about the turn of the Salzach river which had some significant economical importance in the old days.

One more Means of Transport a Penny Farthing

The village Oberndorf was also on the installati

on. Known for Franz Xaver Gruber who lived in the area and wrote: Silent Night, Holy Night.

And a failed river boat project, which we also came across in Braunau am Inn.

We were able to climb up on the roof of the main living building with a nice view overlooking Burghausen Town, Hedwigs Swimming Pool and Spa, the Wöhrsee,

We continued and walked down to the town and, after sharing some cake in a coffee shop next to the river, visited St. Jakob Church. 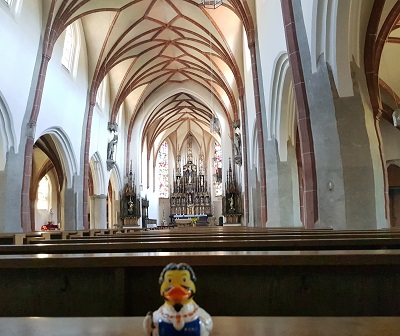 Next stage was crossing the bridge across the Salzach River.

Where we saw this flags riminding of Franz Xaver Gruber who worte the Christmass Song Silent Night, Holy Night.

We walked across the bridge over the Salzach River and to our surprise noticed (Ach, was für eine Überraschung; Oops, what a surprise) that we ended up in Austria. In the town Ach. No controls at the border.

From across the river, while we enjoyed some cake in the sun with a gorgeous view overlooking the whole 1051 m broad castle, we later could hear “Haindling” perform and sing in the castle. But we don’t know about his motivation.

We returned to Bavaria, not knowing, when the local bus would drive to the trainstation. We waited at a fountain at the main place next to the bus station for 30 minutes.