Traffic Accident at the Schatzberg Wasserburg

Sheila has found several places and stories about Wittelsbacher family members related with horses and /or traffic accidents.

Not much is known about the destiny of the horses but some died in the events.

Therefor we also had to go to Wasserburg am Inn again. As we missed out to take a picture of the site of the perilous, shocking carriage accident of the last Bavarian Electress Maria Leopoldine. (By marriage with Karl Theodor, he was above 70, Maria Leopoldine Of Austria-Este (Habsburg family) only 18 when she was forced to marry him.

The marriage took place in Innbruck, Austria between Milano and Munich.

We started the bicycle tour in Rosenheim after we got here by train with the known comfort on a cloudy day.

But it was still dry in the morning. We followed the turn of the impressively contained Inn River and passed several river Barrages. With power stations. We enjoyed some picturesque Old Water Arms along the mighty but obstructed Inn river and saw a lot of big birds, swans, and herons.

The bicycle route ist quite comfortable and pleasant. But as rain was in the air, it wasn’t busy.

Bathing lake at the river with security messures which Sheila of course had to inspect.

I did not understand the meaning of that construction until to 08.10.2022. I though the locks and the bridge symbolizes the unbreakable connection and love between people. But maybe it also symbolzizes that those connections can be easily broken. The locks and connections are removed frequently. Like the connection to your beloved holiday homes in the south.

On the way we learned, that there is a lot of „Elend“ (misery) in Germany, not only in trains.

But there is still enough wood to keep us warm.

Foundation Attl, for people who need assistance to get along in life.

But Sheila did not miss to stop and smell the roses and flowers which are still along the way.

Then we reached Wasserburg and the site of Maria’s perilous accident 23.05.1848. In pouring rain. It takes a nerdy swarm to do such things. We went up and down the Achatzberg (Achatiusberg). In pouring rain.

Maria was a Habsburger princess (but also related with the Wittelsbacher) She saved Bavaria from becoming part of the Austrian, Habsburger Empire. She 1799 prevented, that the Austrian Envoy could get to the deathbed of her husband. The envoy was trying to get the old, sick man to sign a contract to trade the Netherlands for Bavaria. The marriage wasn’t a happy one and Karl Theodor even would have accepted a child stemming from an affair of his wife. To create an appropriate heir. But she didn’t want that.

But she, some months after Karl Theodors death, gave birth to a child which was taken care for by the Habsburger familiy in Austria. Back in Bavaria she successfully started farming and even in person sold her essential products on markets in Munich. Which was not „comme il faut“ at the court in Munich.

King Ludwig I. was a good friend and 1848 thanked her for saving the Wittelsbacher Bavarian Throne and heritage. Maria was among the first ones who warned Ludwig of the comming revolution. Maria Leopoldine, on her way to Salzburg (where she wanted to inspect one of her many possessions) “collided” here. With another carriage. As stated in Wikipedia. And, on the memorial column. Which was installed “60 m above” the actual site of the accident. Which means, the actual site must have been next to the church for the leprosarium St. Achatz. But who would mention that news in such a story.

Maria’s carriage was driving upwards on the mountain, a loose load downwards without coachman caused the accident. Not really a collision. Rumors have it, that Leopoldine was found under her carriage with her “Portefeuille” in a box on her lap. Her investment papers which she liked more than her real estate possessions. Als she could always have her ”Portefeuille” on her. Rumors say her greed made her carry the box and it knocked her dead during the accident, other rumors that she was still alive and walked after she was dragged out from the wreck after some hours. But she broke down with internal injuries and died soon later. Kind of like Sissi (Sisi), empress Elizabeth from Austria (Wittelsbacher Princess   I n   Bavaria) who died some time later, after she was stabbed in Genifa, Switzerland.

Maria’s  successful investments in the brewing business were related to her high Habsburg ancestry. She successfully for some time could enjoy being cleared from taxes or duties on grain imported from abroad. Crossing the borders in the German Empire and abusing her status. Other competitors did not have such privileges but others had too. (Spezlwirtschaft, Nepotism)

I could not understand, why she, as a Habsburg girl supported Wittelsbacher Duke Max IV. from Palatine. But I recently heard a documentation that she hated her Habsburg family after they forced her to marry the old Geezer Karl Theodor. Just to get Bavaria into Habsburg’s hands. And there are even rumors, that she had an affair with Duke Maximillian IV., the far away heir and later King Maximilian I. of Bavaria. And with other men. During her short marriage she mostly lifed in Castle Nymphenburg in Munich. A painting of her is In Castle Nymphenburg now, but not in the Schönheitsgalerie. But her daugher in law, Irene Countess Pallavicini is.

Maria is buried on the Antoniberg close to Neuburg at the Danube River, one of her favorite places to stay. She had several nice homes or castles. She bequeathed a fortune to her two sons and was an early example of Women Emancipation in the upper class.

Before we took the train back we had as good, big breakfirst in Wasserburg while it was still raining. But we sat outside under the beautiful gothic arcades. Actually we were hoping to cycle back to Munich, but the weather was too bad. 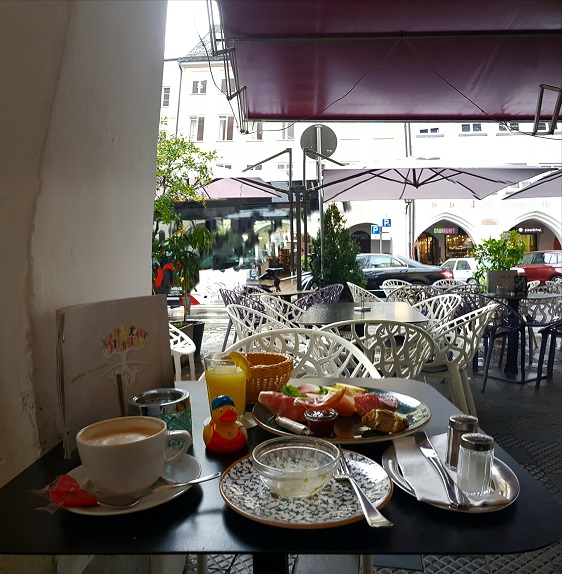 Emperor Wilhelm II. by a fake rumor might have said about horses and cars and their use during wars: Cars are only a transitional appearance.  But horses seem to be quite dangerous.

We don’t think it’s true, what emperor Wilhelm II. maybe said about horses. And to back them more on the battlefields than modern tanks.  (fake quote but if the legend becomes the truth, print the legend).

Mozart did not like to use horse carriages because travelling this way between Vienna and Salzburg made his behind burn. And trips are always dangerous.