The Beauty and the Beasts, Tegernsee, Chess is perilous, Haubentaucher

Update: I just came across a documentation about a hike in comfort and style across the European Alps.

The SWR, one of Germany’s public broadcasting networks, came up with this documentation.

According to the tour guide (financed by the kind German fee payers) the hiking group saw one or two rare “Haubentaucher”. Some of them appear swimming in the Tegernsee close to Gmund. A Duck undisputably  appears too in the movie ahort before. (starts at  02:55 minutes in the movie)

The tour guide fortunately has an austrian accent. 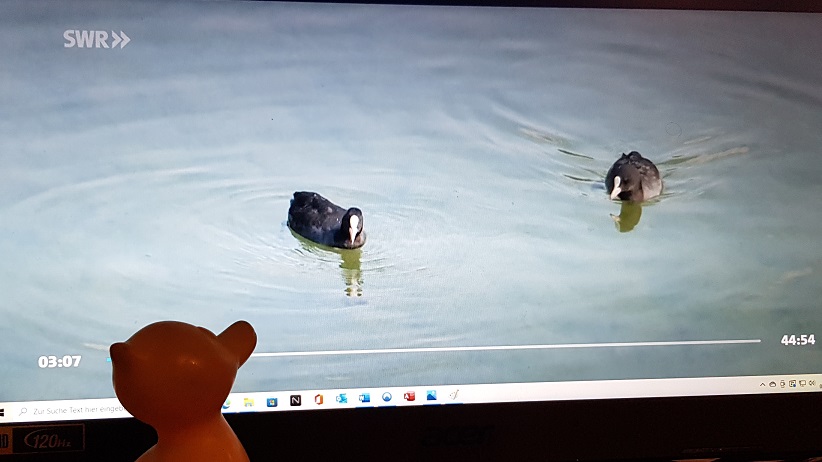 Now Sheila presumes, that another  publicly funded tour guide had too much beer in the Tegernseer Bräustüberl.
Before he started the tour.

Here is another suitable Bavarian translation for Haubentaucher.

Back to the main story:

The Tegernsee Valley maybe 50 km southeast from Munich is one of the nicest places in Germany and a popular but expensive place to live at. A real beauty.

Monastery Tegernsee was the most important monastery in Oberbayern (Upper Bavaria) founded in the 8th century (746) and it founded or re-founded or resettled many other monasteries in the area, like Benediktbeuern.

The story of its foundation proves that the royal game of Chess is a dangerous, perilous and sometimes fraudulent game. (son of Carolingian Pippin 714-768 killed son of founder Huosi Oatkar after losing a game of Chess. By hitting him with the massive chessboard.

The story is depicted in the curch. I can see the arm of one of the men (maybe King Pippin) on either a Bishop or Pawn (chess) in front of the church rooks. But I don’t see the blood-smeared chessboard and no crying queen.

The event caused desperate Oatkar and his brother to retreat from normal live and to found the monastery ).

Horse-Riding is dangerous too. Prinz Carl who renounced the Greek Throne, Brother and 1848 rescuer of King Ludwig, died here 1875 after being pitched by his horse.

It is not documented and unlikely that they had a brewery in the monastery earlier than in
the 17th century (the monks seemed to have preferred wine before that time) but some state, the brewery of today is one of the oldest. But their beer is among the best and very  popular even in Munich. Walther von der Vogelweide was here as a guest too after he made a detour to enjoy the pleasures of this place. He was hoping he could get some of the praised wine of the estates of the monastary in Italy. But no, he complained he only got water; to drink and that he had to clean his hands with it.

Maximilian did a lot for the area to improve the economy and is still liked a lot here although he sent tens of thousands of Bavarians to die on Napoleons battlefields. He was one of the allied of Napoleon and was hoping with the forced marriage of one of his daughters „Auguste“ with Napoleons stepson „Eugen Beauharnais“ who became Vize King of Italy , he could get his feet on the French throne. Another daughter, Marie Sophie, was forced to marry Bourbon Francis II. who was to become the king of the two Sicillies. She had never met him before and he did not turn out to be a good husband. The wedding took place in Munich without the groom being present. (Proxi Marriage) He was substituted in Munich by Maries cousin later King Ludwig I. during the wedding ceremony and Marie Sophie after that traveled to Napoli to first meet her new, unknown husband.

One of the  memorial plates in the church Saint Quirinus also commemorates Francis II. (Bourbon, two Sicilies) who visited the Tegernsee for a family celebration and another wedding after he was kicked out of his kingdoms.

Sissis (empress Elisabeth of Austria) farther (Herzog Max in Bayern, Zithermaxl) who died 1888 is interred here in this church. Sissi did not join the funeral, but her husband Emperor Franz Joseph came together with crown prince Rudolf). Brother Carl Theodor is interred in the crypt of Castle Tegernsee, he was an famous eye doctor who worked in the regional Hospital in Tegernesee.

After Francis II. was toppled by liberator Garibaldi and thrown out of Napoli and Gaeta, he had to be put up in Bavaria, like in the castle Garatshausen at the Starnberger See.  And in Munich. Which his wife Marie Sophie and her cousin King Ludwig I. of Bavaria provided. And later in Arco at the Gardasee.

The Tegernsee later became a popular place for the Nazis and several bought nice properties here and lived here with their families. Hermann Göring however did not wanted to fool around with only one nice villa or castle, he was planning to change the whole valley into a hunting park and to take over the complete valley as he liked to hunt in the area like the Wittelsbacher and their relatives.

Thanks to some bats we were still able to take pictures of the former Nazi Vacation Hotel “Kurheim Hanselbauer”, later Hotel Lederer. The plan was to tear it down 2017 after decades of negotiation what to do with the old Hotel. But due to some bats which moved into the roof of the ruin they decided to now finally wait until November 2019 to continue tearing the hotel down and to build a new one.

The place became famous. It was the site of the “Nacht der langen Messer” (night of the long knives). (also known as operation „Kolibri“ engl. Hummingbird Project)

It was here were Hitler in person with a pistol in his hands arrested Ernst Röhm in his sleeping room. Together with Röhm’s joining young male members of the competing Nazi organization SA 1934. Ernst Röhm and many SA members were executed soon later without formal court proceedings. But also some others who were standing in Hitlers way. Röhm and others died in the prison Stadelheim soon later.
Röhm did not shoot himself in famous cell 70 after he received a pistol as Hitler was expecting.
Therefor he had to be murdered. A law was passed later, which made the events legal as an act of the state’s self-defence. It’s great to be a Führer.

Here is what 12 year old girl Gudrun wrote 1941 about war to her farther at the Tegernsee. After she learned about the “Barbarossa” campaign against until to then allied Russia:

It is terrible to go at war against Russia. Russia is soooo big, it is going to be a tough one. Gudrun was the daughter of the Reichsführer SS, Heinrich Himmler, who too had a nice villa close to the shore of the lake. Sometimes you should better listen to what your kids say.

But Sheila and the swarm besides visiting the beasts enjoyed

-the beautiful Tegernsee, and

-the famous and popular “Bräustüberl” which is owned by family members of the Wittelsbacher.
The place was very krauted when we came. But the waiters were still working fast and friendly. We started with an excellent liver dumpling soup and ordered some of the excellent beer from the brewery.
Then we choose a classic roast pork for a fair price, fresh from the oven. It was tasty, crunchy and juicy. It came with two traditional dumplings (Semmelnknödeln bread, Kartoffelnknödeln potato) and Sauerkraut.

Then we went on a boat tour to Bad Wiessee,

visited the notorious former Hanselbauer, had coffee and cake in a neighboring coffee shop close to the Hotel Wittelsbach.

And even found some time to rent a Pedalo boat which Sheila likes so much- To get some nice photos of the lake and its surroundings.

We also enjoyed the nice beach promenade with many pieces of art in Bad Wiessee. We could even listen to some nice classic live Music.

We also visited the church Saint Quirinus of the former monastery “Kloster Tegernsee”.
It was taken over by the Wittelsbacher after the Secularization (King Max I. baught it from a business man who baught it before). Several memorial plates in the church commemorate family events of the Wittelsbacher in the church. Emperor Franz Joseph from Austria was here, Czar Alexander I. (a cousin). I did not find Sissis name (our Sissi was disappointed; not even for the described wedding 1892 where husband emperor Franz Joseph was present) on the plates. But Sissi had been at the Tegernsee and she next to being an excellent equestrian and hiker was also a good swimmer and swam in the Tegernsee. She wrote a poem about it: “Was mir der Tegernsee erzählt”. She together with her sister Marie Sophie, wife of Francis II. of the two Sicilies (Bourbon) dynasty but also close related to the Habsburger family, later queen of the two Sicilies, scratched her cousin’s (king Maximilian I. of Bavaria) window on the “Königsalm”

At the later event 1892 at the other indicated wedding of another prince Prinzregent Luitpold was there too. He too had a hunting  enclosure not far away at Fall in the „Uppper Isar Valley„.

The brewery was taken over as well by the Wittelsbacher and is now the Ducal Bavarian Brewery of Tegernsee. It is owned by the successor of King Max I., operated by Maria Anna Cuchess In Bavaria, daughter of Duke Max In Bavaria (born Duke Max Of Bavaria), this part of the family today carries the Title “Herzöge I n   Bayern” (after an adoption of Max Emanuel born V o n Bayern, royal line, adopted by the line „In Bayern“ who has no, by Wittelsbacher standard adequate male successor.

In aristocratic circles Francis II. Von Bayern, the leader of the house Wittelsbach who also has no son, is still a royal highness. The title „Herzog Von Bayern“ will therfore go to a heir of the third son of the last Bavarian King Ludwig III. , Luitpold Prince of Bavaria„. Although he did not marry coequal at this time (an adequete noble wife as the house treaty claimed), but the house treaty was altered 1999.

And so will the title Herzog In Bayern, as much as I understand. Checkpot.

The theoretic claims from the house of Stuarts (king of England, Scottland, Ireland and France) will go to Sophie Von und Zu Liechtenstein, a daughter of Max Emanuel. The Stuarts allow female heritage of the throne.

We finished the historic trip with a nice ice cream, which was easier to swallow. which we got  next to the souvenir shop of the Bräustüberl.

We did not find the old post Office in  „Gmund“ with the mentioned painting which is mentioned in the link above, I think the complex was torn down recently.